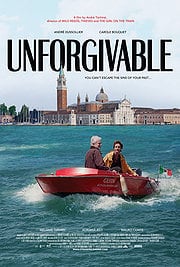 [xrr rating=2.0/5]French author Philippe Djian’s 2009 novel Impardonnables is just over 200 pages long, and it seems that André Téchiné committed himself to getting every last bit of it into the screen in his film adaptation. The respected writer-director behind such films as My Favorite Season (1993), Wild Reeds (1994) and, most recently, The Girl on the Train (2009) probably considers an exhaustive adaptation to be the proper way to honor the original work. That doesn’t necessarily mean assiduously faithful – several key details have clearly been changed in taking the story from page to screen – but the film version, bearing the translated title Unforgivable, has an unwieldy sprawl that belies its literary origins even as it bogs the whole endeavor down.

The film begins as a semi-famous crime novelist named Francis (André Dussollier) pursues the rental of an isolated house on the island of Sant’Erasmo, a neighbor of the city of Venice. He’s planning to work on a new book, but instead becomes smitten with Judith (Carole Bouquet), the real estate agent who helps him find the property. Before the tour of the premises is even complete, he proposes that she move in with him, a romantic presumptuousness that only happens in the movies and only happens in remotely convincing fashion in French movies. The film then hops forward in time, as Francis has been stagnant in his creative process, gotten married to Judith and is welcoming Alice (Mélanie Thierry), his grown daughter, to the home for a visit. From there, an abundance of complication start to mount.

First, Alice goes missing, leaving behind her daughter (Zoé Duthion), and inspiring Francis to engage the services of a retired private investigator (Adriana Asti), who also happens to be one of Judith’s ex-lovers. As she tries to discern the whereabouts of Alice, she is also dealing with the release of her troubled son Jérémie (Mauro Conte) from prison. Later when Francis grows to believe Judith is having an affair, he hires Jérémie to tail her. And on and on it goes with a plot that’s structured like a lunatic French farce but is played deadly serious.

Téchiné brings a resolutely passion-free approach to the film. Despite goings-on that approach the florid, it has a tone that is hopelessly staid, perhaps meant to imbue a veneer of respectability to the flashes of melodrama in the story but ultimately causing the whole thing to slacken instead. The screenplay written by Téchiné with Mehdi Ben Attia tends to flick across the relationships rather than delve into them, making the progression from one incident to the next all the duller. Even with great tragedy and heartbreak unfolding throughout, it never feels like there’s anything at stake. Anxiety evaporates with the shift of a scene. The only moments that work, interestingly enough, are the smaller ones, as characters interact in ways that hint at the ways they stand together in the shadows of shared history.

Pulling this much material together into a coherent, compelling whole is difficult in a film. Robert Altman was the unparalleled master of it, and the task even overwhelmed him on a regular basis. It’s not that Téchiné shows no fidelity for it, but the problem instead is that he demonstrates no motivated interest in taming the stray hairs of his story or at least fashioning them into something that is appealing in its messiness. What’s left, then, is an airless, lifeless exercise in wearying complexity.