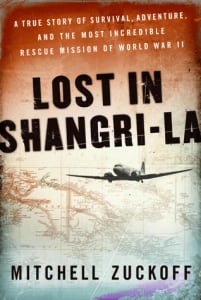 [xrr rating=3.75/5]We are fascinated with lost civilizations. Every so often, a lost Amazon tribe will appear on the news or we will hear of some nomadic clan discovered in Africa or Turkmenistan. But in a world that has become connected with technology, the ease of airplane travel and picked over by cartographers, it is easy to forget that less than 100 years ago there were still places on this planet completely unexplored.

In Mitchell Zuckoff’s Lost in Shangri-La, three American soldiers survive not only a plane crash, but five weeks lost in the wilds of Papua New Guinea. The year is 1945 and the world is in the waning months of World War II. Germany has surrounded and the United States is forcing back Japanese forces in the South Pacific. However, not everyone is fighting and to raise morale among bored soldiers the military arranges joy flights over a recently discovered New Guinean valley. Dubbed “Shangri-La” after the utopia proffered by James Hilton in his 1933 novel Lost Horizon, Zuckoff describes the valley as “a world that time didn’t forget. Time never knew it existed.” When a flight of 24 people, including many members of the Women Army Corps, crashes into the valley, the survivors must battle festering wounds, fight the elements and learn how to communicate with the “cannibalistic” indigenous people.

Zuckoff’s book moves quickly as he plunges us into the valley along with the three survivors, two soldiers and a woman. Since the valley is surrounded by sharp mountains and unpredictable weather, it is impossible for the Army to reach them with aircraft. As the trio struggle to survive, another dangerous mission begins: a group of Filipino-American paratroopers must jump into the valley, heal the wounded survivors and then figure out a way to get out.

Lost in Shangri-La may sound like an adventure story, but it is also an interesting anthropological study. Though the survivors do make contact with the indigenous people (men who are dressed only in penis gourds), their encounters are mostly peaceful. Zuckoff takes great pains to not only describe the somewhat elementary perceptions of the Americans, but also interviews surviving natives who disclose their opinions of the light-skinned people who fell from the sky. This anthropology also extends to sexual politics of the 1940s. Margaret Hastings, the female survivor, becomes an instant celebrity, bolstered by her love of adventure and beautiful looks, a hook the media cannot deny.

While Zuckoff gleaned most of his information from newspapers, journals and interviews with the children of people involved, he did uncover a treasure in C. Earl Walter, Jr., the man who led the Filipino paratroopers into the valley. While researching the book, Zuckoff found Walter alive and well in a coastal Oregon town. The ex-soldier provided Zuckoff with a cornucopia of information and photos, many of which appear in the book.

If anything, Lost in Shangri-La is a tragedy. By crashing into the valley, the Americans introduced currency and modern weapons into an agrarian society that still used spears to fight with warring tribes. The five weeks may have marked Hastings and the other survivors for the rest of their lives, but it ultimately brought huge changes to one of the last groups of people uninvolved in the rest of the world. The Americans walked away with a tale of valor and survival. For the indigenous people of Papua New Guinea, it was the beginning of the end.