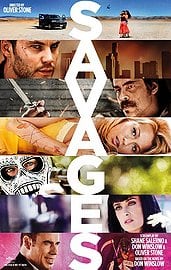 [xrr rating=3.25/5]When was the last time Oliver Stone actually made a good film? For the life of me, I would have to say 1991 when JFK re-opened national interest in the Warren Commission and Jim Garrison. Since then, Stone has made films that are gory but interesting (Natural Born Killers), gory and yet terrible (U-Turn), schlocky but fun (Any Given Sunday) and DOA studio jobs that lacked any of his former trademark hyperactivity (World Trade Center and W.). With Savages, Stone has finally rolled up his sleeves again to create a brutally violent film that lacks any resonance whatsoever.

You can say Savages is pertinent because it deals with the drug war that is ripping up Mexico, but Stone merely uses the conflict as an excuse to create pulp entertainment. Based on the novel by Don Winslow, Savages is more True Romance fantasia than piercing exposé of how the illegality of drugs costs us millions of dollars and thousands of lives each year. It’s gory, it’s horribly flawed and it features some pretty bad acting, yet Savages is fun and exciting if you don’t take any of it seriously.

Chon (Taylor Kitsch) and Ben (Aaron Johnson) are two California weed growers who supposedly produce bud with the highest level of THC on the planet. The pair has grown a mini-empire in Laguna Beach, living in more or less peaceful bliss. Ben is the idealist hippy who goes to impoverished nations and helps create sustainable habitats. Chon is the veteran who has seen some shit in Afghanistan. Wanna guess which has the brawn and who has the brains? The one thing the two men have in common is O (Blake Lively), the lovely blonde who shares not only their home but their beds. But as O explains in the film’s lengthy, expositional opener, the arrangement works for the three of them.

It’s only a matter of time before the Mexican cartels want a piece of Ben and Chon’s market and when the pair refuses to cave to the demands of crime lord Elena (Salma Hayek), she has her thugs kidnap O. Entering in the mix are John Travolta as a comically corrupt DEA agent and Benicio Del Toro as Elena’s vicious enforcer Lado.

The acting runs the gamut in Savages, an unevenness that knocks the film down a few pegs. Both Kitsch and Lively are television actors who seem unable to make the jump to the big screen. While Kitsch is wooden, his part doesn’t require much more than simmering anger, Lively’s narrator needed more nuance and it’s hard to buy the actress as the hearth mother/sex goddess whose kidnapping sends Chon and Ben on a murderous rampage.

On the other hand, Del Toro’s Lado is another coup for the actor, who already has a clutch of memorable characters under his belt. His cruel enforcer is menacing, despite his comical mustache and pompadour hairstyle, a Mexican Nick Cave let loose to rape and murder. When one victim spits in his face, Lado not only wipes the sputum away, but licks it off his hand. Yeah, he’s that kind of bad motherfucker.

In terms of stylistic choices, Stone restrains himself for most of Savages. We don’t see all the cinema tricks he unleashed on Natural Born Killers, although the opening sequence features shaky camerawork. The movie does lead to a climax that could be all Sergio Leone but instead turns into a meta bait and switch that doesn’t necessarily work. But for most of its runtime, Savages proves that Stone hasn’t gone completely soft. Let’s just hope he can soar to the heights of his past victories with whatever comes next.