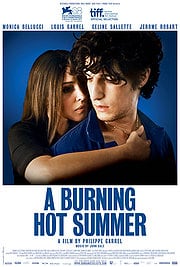 [xrr rating=1.75/5]A man paces nervously at a gas station, clearly unsettled by some unknown feeling. Later he drives with a distracted, anxious look on a winding country road. With a sudden intake of breath and resolve, the man pushes the gas pedal all the way down and closes his eyes. Between these two moments, a shot of a nude woman reclining on blue cloth, beckoning to the camera and mouthing wordlessly and paralyzed. It’s hard to tell which is more surprising: that shot or the announcement after the man’s off-screen crash that he died.

The man is, or was, Frédéric (Louis Garrel), a painter who moved to Rome, and Philippe Garrel’s A Burning Hot Summer abruptly jumps back in time a year to figure out how he came to suicide. The glimpsed woman is his lover, Angèle (Monica Bellucci), who plays an aspiring starlet. That Bellucci is a good 25 years too old to play the part of an ingénue is but one of the many touches in the film that verge on the absurd. Garrel has a lot on his mind, about art, about politics, about love. Yet he never truly gets to his ideas, merely introducing faint wisps of thematic strands before drifting off into the next scene of inaction.

Garrel’s clear artistic point of reference for this sojourn into the Italian film industry and a crumbling relationship is Jean-Luc Godard’s 1963 masterpiece Contempt. Like Godard’s movie, Garrel’s uses the amusingly unnecessary CinemaScope aspect ratio to capture a primarily talky film about a beautiful couple that falls out of love. But where Godard filled his frame with visual invention and seemed to use the space as a canvas for intellectual exploration, Garrel can’t hold an idea long enough to even jot down.

Garrel splits his focus between two couple, Frédéric/Angèle and Paul (Jérôme Robart) and Élisabeth (Céline Sallette). The former exist in a constant state of dissolution, replicating Brigitte Bardot’s dissatisfaction with Michel Piccoli in Godard’s film. Paul and Élisabeth, who meet on the set of a film about the Resistance, have their quibbles and doubts but represent a stable relationship. There are no major shakeups here, the pre-ordained successful and failed couples treading water and feeding lifeless performances. Louis Garrel plays such a gorgeous, affectless prop one could make the argument that he, not Bellucci, is playing the Bardot part, while Bellucci punctuates her own hollow performance with occasional, laughable stage crying. Robart and Sallette upstage the stars, a not-unheard-of phenomenon but rare for performances so underwritten and perfunctorily performed. Only a dance scene where Bellucci sensually grinds with another man injects any kind of life into the romantic conflicts, but soon even that has faded to yet more detached ennui.

The other subjects prove no more fertile. Garrel uses Paul’s time as a bit player in the aforementioned Resistance film as a point of entry in a discussion about revolutionary politics and action. In his film-within-a-film, Garrel reminds youth of how fervently the young used to defend their land, and the director sprinkles in references to more modern revolts in the interim. That zeal has died it seems; one character protests the idea of the struggle with the childishly whined, if nevertheless accurate, statement, “But revolutions kill people!” Art offers no solace, either: Frédéric came to Rome, where he is surrounded by art, but he gets nothing from it. “All that dead beauty is so uninspiring,” says the man who seems more dead than any painting.

That line comes back to bite Garrel in this ass, as it perfectly summarizes this dim, removed movie. If the characters’ deflated personae and listless talk of revolution demonstrates a slide backward in the conviction and dedication of youth, then does not the film’s own banal structure and aesthetic reflect a failure to live up to its Godardian inspiration? Contempt is at once one of Godard’s most formally conventional films and one of his most subversive, a film that plays by mainstream rules only to the point that it can dismantle them. Garrel understands this, but he cannot replicate the effect, merely throwing up Godard’s façade without porting over any of its ingenious underpinnings. As such, this film, made 60 years after the movie it uses as a launchpad, seems the sort of work that Contempt so brilliantly skewered.