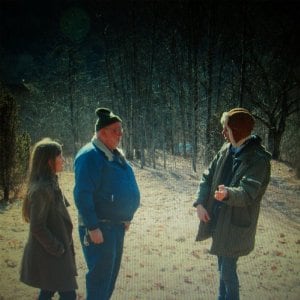 [xrr rating=4.25/5]With only gap-toothed guitar licks, soukous rhythms and principal David Longstreth’s distinguishable, obtuse vocal turns passing for continuity, every Dirty Projectors album is a venture in novelty, a fact no less true of Swing Lo Magellan. Bereft of 2009 breakthrough Bitte Orca’s guitar rock-bordering flirtations with bombast, ragged anchors “Temecula Sunrise” and “Useful Chamber” providing that album’s primary bite, Swing Lo is a more subdued beast. Swing Lo doesn’t see, however, Dirty Projectors readopt the sonic meandering of earlier output. Its songs are less fractious and cut-up, each possessing a wholeness that verges in some areas on being overly neat. But the focus is more on sustained momentum than abrupt shifts in intensity.

Kicking off with a humming hymnal opening while Longstreth delineates kinked genealogies in its swaying middle, the roaring guitar lines of “Offspring Are Blank” gives Swing Lo its first heart-pounding moments. Its plucked-string successor, the vaguely trip-hoppy “About to Die,” sees Longstreth, in a Dan Bejar-esque turn, repeatedly mentioning redacting a “tablet of values.” Both tracks betray the album’s inspirations, namely, the Bible and other tomes reportedly on hand during Swing Lo’s composition in the Catskills. Similarly, the postmodern “Gun Has No Trigger,” calling up “distance, justice, power” and the trappings of “both slave and master” makes sense placed within the context of another apparent Longstreth read – Guy Debord’s The Society of the Spectacle. The proverbial “Unto Caesar” gives up a Debordian nugget (“Where the vested spectators/ Watch it”). And its Americana-tinged opening – leading into stomp and creaky fiddles – and sing-along center lend it a homegrown feel counterbalancing the insistent overflows of the song’s banks caused by the ostentatious rhythm and instrumentation.

Besides already representing a break with the unofficial tradition of embedding an album’s name-phrase in the lyrics of a seemingly unrelated song, the title track has an acoustic warble adhering to its sides calling to mind Lou Reed. The glitchy, string-stuffed “See What She Seeing” has a companion in Rise Above’s “What I See” (minus the unhinged bridge that throws the latter track entirely off the rails) while its wavelengths have a casual rattle and bounce that evokes early Architecture in Helsinki. And the echo-laden throwback “Irresponsible Tune,” set against barbershop multi-part harmonies and placid figurations sounds like a graduated version of cut “Twenty-Foot Stalks” from 2003’s Morning Better Last!.

“Maybe That Was It,” with dramatic cymbal rides, competing guitars in stereo and lackadaisical bass lines harks back to early Projectors, while “The Socialites” provides a warped groove along the lines of Poliça. With Projector Amber Coffman’s voice exploding in multiples at one point, shifty, moody synth whine and vibraphone establish a brisk beat despite the sparseness. But neither has the memorable kick of other entries, not least of which the martial rhythm punctuating “Impregnable Question.” As unlikely a love song as the later “Dance for You” is a credo, both provide the strongest sonic touchstones on the record. Breathy apexes on the former give weight to the devotion evoked at its end, emerging in spite of not seeing “eye to eye” and questions of “Whether there is or isn’t any position/ You care if I take or if I don’t.” The latter’s jammy guitar falsettos, tumbling breathlessly into stirring arrangements, is a saccharine three and a half minutes of uncut pop sentimentality and the record’s instant standout.

Truthfully, though, there isn’t all that much that compares to the electro glory of The Getty Address’ “Not Having Found” or the effortless sway of “Stillness Is the Move.” Here, the impressionistic single-mindedness shot through records such as 2007’s downright insurrectionary (Black Flag-inspired) Rise Above (“They hit me across the head with a billy club/ I tell them to go get fucked”) is mostly absent. In its place: a verbose, lyrically crammed style (no sustained monomaniacal squeals of “I need action” as on the previous “Six Pack”) and themes less fiery, more measured but no less brooding, and the album does not shy from maturity nor discomfort. (At one point, veering into choppy waters, Longstreth considers how “In my heart is music” and “In my mind is a song/ But in my eyes a world crooked, fucked up and wrong.”)

On Swing Lo Magellan, the omnipresent polyrhythms and handclap percussion remain, as well as the acoustic and electric coloratura that has characterized almost every Dirty Projectors record. But all are underlined by a tighter sensibility this time around that forgoes the artificially enforced arc of other entries in favor of an individuated approach that bucks as well as links to the rest of the discography and the variegated influences and inputs that went into its composition. If chasing threads to their sources in this way sounds tedious, there’s a simpler way to appreciate this Dirty Projectors record: with melodies readily unfolding like paper flowers, simply play Swing Lo Magellan and the rest will likely take care of itself.