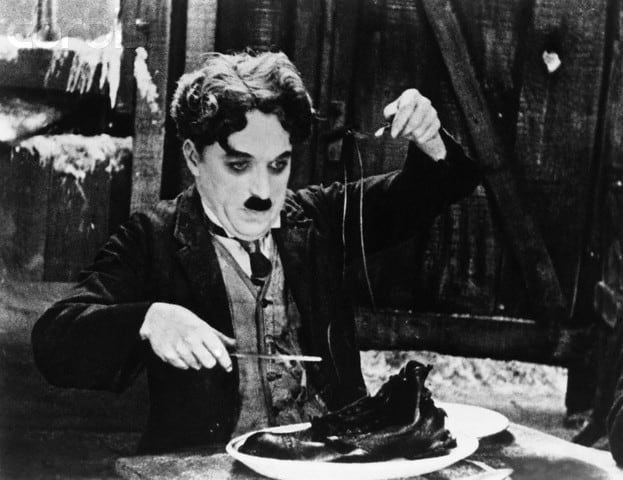 By the time The Gold Rush hit theaters in 1925, Charlie Chaplin was already an international phenomenon, so rabidly adored the world over that his one flop, the 1923 drama A Woman in Paris, could be attributed to his absence in front of the camera. Yet Chaplin never stopped loving that film (even if he would not release it to the public again until his last year of life), and the lessons of naturalistic acting and carefully controlled pathos he learned in making it clearly shaped what became a quantum leap forward for the writer-director-star. Of all the film’s unrivaled mastery of art direction, acting and sentimentality, what is most remarkable about The Gold Rush is that it does not signal the culmination of a career but the blossoming of one. Chaplin’s shorts and early features showed off a considerable talent, but The Gold Rush reintroduced the artist as a genius.

As with nearly all of Chaplin’s films, be they silent or talkie, The Gold Rush features an episodic plot, extended chunks centered on a specific set and the occasional gag that exists in its own separate realm. The film bounces around the Yukon, from treacherous tundra to (literally) windswept cabins to a dance hall where lucky prospectors spend their finds. But of all Chaplin’s features, none has so fluid a flow between set pieces and jokes as this, linked through a total control of emotion and comedy that would become the director’s trademark for the rest of his career.

The setup is simple: the Little Tramp, here billed as the Lone Prospector, heads to the Yukon seeking his fortune, only to fall prey to intense hunger and misery. As Jeffrey Vance so astutely notes in his commentary for the Criterion Collection release of the film, hunger is the great driving force of Chaplin’s Tramp movies. Here that hunger reaches its most extreme limits: Chaplin based much of the film off what he read about the infamous Donner Party. Intriguingly, the director considered this aspect of the narrative the basis for the comedy, finding no humor in the boring search for gold but hilarity in the idea of order-destroying starvation. 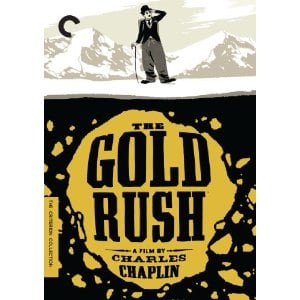 The film’s best gags almost all involve food. The boiling of a shoe, the hallucination of the Tramp as a giant chicken as another prospector salivates, the roll dance: all center on the need for food and, in the case of the roll dance, of food as a symbol of love and comfort. Such gags play on Chaplin’s unparalleled ability to give life and character to mere objects, and in multifaceted ways. Keep an eye out for the subtle reversal of Chaplin eating his shoe and later making actual nourishment, the rolls, into makeshift shoes for his miniature ballet. What’s more, after the Tramp eats that shoe, he wears wrapped rags around his foot for the rest of the film, the minute continuity creating its own narrative flow and reminding the audience of his sacrifice and prompting several more gags.

But the continuity afforded by a careful reuse of sets and costumes is secondary to the emotional through line that joins all the film’s parts. The Tramp comes into contact with many characters in his journey, but it is not for nothing that Chaplin here calls him the “Lone” Prospector. With his compatriot Big Jim (regular Chaplin heavy Mack Swain), the Tramp becomes a vision of a meal. In the Yukon boomtown, he is an outsider among the crowd of friends. In one of the film’s best shots, Chaplin stands with his back to the camera, fidgeting with loneliness and sadness as everyone else in the dance hall pairs up and moves away from him onto the floor. And even the completely removed roll dance, a sudden burst of joy as the Tramp woos a woman he met in the hall (Georgia Hale), is joined harshly to the rest of the film when, at the conclusion of the ebullient number, the Tramp wakes up and realizes it was all a dream, and that no one came to his New Year’s dinner.

When watching The Gold Rush, one has the option these days of the original 1925 version of the film, restored from prints damaged well beyond full repair, and a 1942 re-edit that attempted to update the movie for the sound era. Chaplin replaced the intertitles with narration, composed a new score and, most controversially, cut about 10 minutes worth of material from the original to “streamline” it. The results are immediately noticeable: the ’42 version acts as a lean fable, deftly hitting its comic and heartbreaking marks with a genteel narration that makes the whole thing into a bedtime story. The 1925 cut, however, is one of the most psychologically rich comedies of its day, or any other. It does not feel any longer than the 1942 version, yet it breathes more, turning its settings into manifestations of psychological states. In the re-edit, the rocking shack constantly being warped and tossed about by wind is a comic tour-de-force. In the longer cut, it is all that and more, a perfect visualization of the Tramp’s and Big Jim’s respective headspaces as they battle the elements and corrupting hunger. Though the new score is so fantastic, incorporating perfect emotional cues and sly quotations of popular and classical music, that it typically accompanies even the original version these days, the 1942 edit is perhaps the greatest mistake of Chaplin’s career. (Not his personal life, of course, but certainly his professional decisions.) Even so, it is as vital as the original in showcasing how the artist thought, and how that thought process changed over the course of his life.