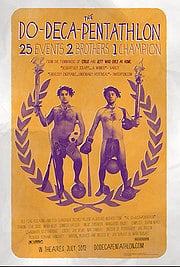 [xrr rating=3.0/5]The Duplass brothers’ work stands at the intersection of two strands of contemporary American cinema. First, there is mumblecore, the loose stylistic approach that strives for a realism grounded in the mundane and that incorporates the “unrehearsed” feel of improvisatory dialogue, in the process making the so-called “gritty” realism we have been accustomed to feel excessively stylized. Second, there is the increasing attention filmmakers have paid to the perceived crisis within masculinity today—specifically heterosexual, white and middle-class. Here, the focus is on the manchild’s arrested development and the ineffectuality of the adult male. These themes are prominent in the latest film by the Duplass brothers, The Do-Deca-Pentathlon. Two brothers in their late thirties, family man Mark (Steve Zissis) and itinerant poker player Jeremy (Mark Kelly), revive the 25-event athletic competition of their childhood as an intra-familial battle of the psyches. Thus, we have not only two ineffectual males, each half-heartedly admiring the life led by the other, but two manchild specimens who have failed to grow up properly and put aside childish things. The Duplass brothers subject these siblings to their signature low-key style of filming, essentially pinning them into a corner and forcing them to reveal something of the true nature behind their mock-heroic competition.

There are strengths and weaknesses to this approach to filmmaking, which remains relatively unchanged for the Duplass brothers. On the one hand, The Do-Deca-Pentathlon feels so slight and slack, lacking any rigor that might link the Duplass’ insights into something larger than the conflict between individuals. For instance, women are largely relegated to the background in this film, whether it be the brothers’ mom hovering in the background and expressing the scattershot worry and concern typical of mothers or Mark’s wife Stephanie (Jennifer Lafleur), who displays exactly the firm but patient loyalty most men like Mark would want from their spouses. This raises a recurring problem in similarly male-centered films: how does one negotiate the tension between their obvious critique of male behavior and the fact that they persist in paying attention almost exclusively to life as viewed from their perspectives, to the exclusion of everyone else? Two recent romantic comedies, David Wain’s Wanderlust and Nicholas Stoller’s The Five-Year Engagement, succeeded in avoiding these pitfalls by closely mapping their narratives to the couples at their center, creating symmetry and a marvelous dramatic tension in the process.

This would be a bigger problem for The Do-Deca-Pentathlon, though, if the film didn’t excavate sufficiently rich insights into the nature of fraternal competition. The Duplass brothers never settle for trite, tidy explanations nor do they accept that competition is innate in men. Over the last few decades, the cinema has illustrated the slow decline of the conventionally heroic male archetype, and there is the tendency, in reaction to this shift, for overcompensation, a return not to the actuality of these male archetypes, who were never real anyway, but to whatever we believed they represented. The Duplass brothers question the validity of such an attempt to “remasculinize” their gender: throughout the film, Mark and Jeremy appear not heroic or macho but simply childish and selfish. We can sympathize with their desire for renewed connection given how sadly estranged from one another they are, but the Duplass brothers take care to show that these men are aging and out of shape, their bodies buckling under the pressure of such strenuous competition.

The Duplass brothers shed the most light on Mark and Jeremy by asking why they seek to compete in this way in the first place. They don’t seem primarily motivated by the desire to best one another, nor are they particularly intent on recapturing the past. Instead, they seek intimacy but don’t know how to find it, suggesting that their return to the past is partly a return to a period in their lives when such intimacy was easier. Making this a film about brothers, rather than close male friends, eliminates any overtones of homoeroticism, as in Lynn Shelton’s great Humpday (which starred Mark Duplass), and hones its focus on the issue of intimacy considered most generally. One of the best moments in the film occurs when Mark and Stephanie have a heart-to-heart conversation after she discovers that he and Jeremy had been competing in their do-deca-pentathlon events behind her back. The vulnerability of this moment, so characteristic of the Duplass brothers, hints at the emotional complexity beneath more conventional tropes like sibling rivalry or the tension between a man’s commitment to his family and to his own sense of masculinity. It is a moment where we see two human beings who just want to be heard by the other.

The Do-Deca-Pentathlon may be a slight film, but it’s also one built to the scale of its protagonists, never smothering them with unearned profundity. At this point, it’s easy to want more from the Duplass brothers, perhaps even a little ambition to work outside their comfort zone, but it’s hard to deny that they have a way with actors. Compared to Jeff, Who Lives at Home, the Duplass’ other film released this year (and one that also dealt with brothers), The Do-Deca-Pentathlon feels somewhat like a step in the wrong direction, or at least a lateral move rather than a step forward, not because it exposes their weaknesses as filmmakers but because it feels so self-consciously like a minor work. Compared to Shelton’s aforementioned Humpday, which revels in putting its male protagonist into uncomfortable and awkward scenarios, the Duplass brothers seem a little too comfortable with their aesthetic, never for a moment challenging themselves here. The fact that the results are enjoyable and thoughtful enough, however, indicates that the Duplass brothers are two filmmakers with genuine talent.