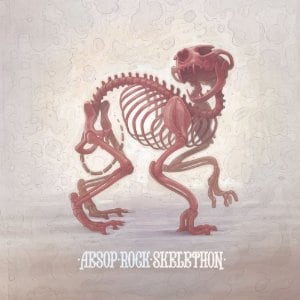 [xrr rating=3.25/5]Now that a considerable amount of time has passed, a look at the mid-2000s pinpoints it as the time a love of playing with language returned to hip-hop. While the rise of trap-hop is the most easily remembered trend of this era, across the board the established favorites began making an attraction out of unorthodox word choices and making how these words sounded together the primary concern. This was the case across the board whether you preferred the mainstream southern stylings of Lil Wayne, the boom-bap traditionalism of Ghostface, or the abstract inventiveness of underground mainstay Aesop Rock. We received Aesop’s last full-length, 2007’s None Shall Pass at the end of this era, and now he’s returned to become a contemporary of the linguistically innovative generation he’s inspired. Fortunately, Skelethon largely measures up, though it’s more polarizing than expected.

Five years is roughly two lifetimes in rap years, and while we heard Aesop as one third of last year’s Hail Mary Mallon project, as well as through sporadic track releases on his 900 Bats website, a lot has changed since his last release. He’s gone through his label dissolving, a divorce and the death of longtime friend and collaborator Camu Tao. The last time Aesop weathered such hardships we got the digital discordance of 2003’s Bazooka Tooth. Just as that album was, to a degree, the inverse of the philosophical warmth of his breakout single “Daylight,” Skelethon replaces the conventional grooves of None Shall Pass with an unsettling avalanche of bombastic samples. Aesop’s caught flack for his own production often being so different than the Blockhead-produced sound people gravitate to most, but he’s grown so much over the past decade that now he seems to know what his strengths as a producer are and raps to them accordingly.

The lyrics, as usual, have a lot to unpack that will either render new gems with each listen or frustrate the listener into quitting midway through the first rotation. But for those of us on the Aes-train, there’s a lot of good to be found. Along with the overt feeling of dread from the changes that come from relationships and lives ending, there’s a few overt motifs that give the album a feeling of symmetry. Among them, the juxtaposition of the pain of removing a deceased friend’s number from one’s phone on “Cycles to Gehenna” near the album’s beginning and the opting to press “ignore” when friends call on “Tetra.” Elsewhere, the overheard sound of fireworks echo, with their most visible mention on “Ruby ‘81,” a storytelling track about a dog rescuing a drowning toddler on the Fourth of July, which happens to be Aesop’s strongest straightforward narrative since {Labor Days}’ “No Regrets.” While there are a few moments of light in the darkness, namely “Racing Stripes,” the tale of how the aforementioned late Camu Tao would deliberately get a horrible haircut in order to force himself to stay home and work, Skelethon is largely a reflection on one man’s depression, culminating in the closing verse on “Gopher Guts,” one of the most brutally honest self-evaluations ever committed to record.

Skelethon is a dark, possibly-divisive exercise in wistfulness that, for Aesop’s sake, needs to exist. While the truths presented are hard to face, the unpredictable soundscape makes it an easy release to become obsessed over. Ever since Appleseed, Aesop’s made great use of language as both cool sounding and a collage of abstract imagery. While his harshest critics are quick to immediately label any turn of phrase they don’t get as “nonsense,” what they fail to realize is that for Aesop’s fans, even if that were the case it wouldn’t matter. Skelethon boasts Aesop standing alone, armed with nothing but his strongest arsenal of styles to date and his substance coming from a territory most artists find too uncomfortable to enter.