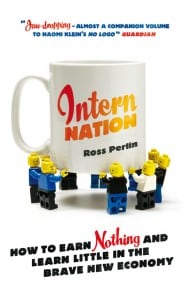 [xrr rating=4.0/5]Our understanding of youth and the nature of work have been fundamentally skewed. In a time of deep economic stagnation, young people are criticized for living off of daddy’s money, then berated for believing that their education, tied to an average $20,000-plus of student loan debt, should net them satisfying full-time work. To compound this, they are increasingly offered unpaid or unfulfilling internships in lieu of entry-level employment. Yet when these youth, saddled with debt and often unemployed or working for free, dare to move back in with their parents, we wring our collective hands and lament the prolonged generational adolescence of these “boomerang kids.” In Intern Nation, Ross Perlin challenges the prevailing notions of internships as valuable professional training for the rising white-collar set; he outlines their shortcomings and dubious legality, citing programs from Disney to the White House, then contrasts them with successful and financially sound apprenticeships and co-ops. The result is an exposé that will have anyone under 35 inventorying their own work experience and hopefully leave the self-aware managers over 35 owning up to some of the ways they have shortchanged young employees.

Perlin’s work is the first of its kind, and his thorough research and range of interviews nod to even-handedness and the possibility that a number of people do find success through their internships. But his urgent tone and overwhelming evidence that most young workers flounder in their internships force the reader to confront their own blindness to the issue and feel Perlin’s sense that something needs to change now. He writes with clarity and wry humor of internships at Disney World, where the work tends to be menial—burger-flipping and ride operation are common assignments. He derides the profit-making schemes of “for-credit” internships and the programs that charge to place students in unpaid positions and casts a skeptical eye on nonprofits replacing full-time staff with federally funded Americorps workers. He takes every branch of government and much of the public and private sectors to task for employing thousands of unpaid interns through a network of nepotism and internal referral. Perlin persuasively argues that internships as they exist are on the verge of permanently becoming exclusionary bastions of middle-class privilege even as they force some into poverty and others into multiple jobs or depress the lifetime wages of many who participate. By the last chapter, the reader is likely to agree.

Intern Nation’s greatest shortcoming is also one of its most startling revelations: there are no hard numbers anywhere. To begin with, there is no standard definition of “intern” and no count of how many are employed nationwide, though the number of job postings for them has ballooned in recent decades. Oversight is left to the employers. Wages and duties are wholly unregulated and interns have essentially none of the rights of traditional employees in cases of collective bargaining, harassment or discrimination. They may do anything from fetch coffee to draft important policy documents and thereby stretch the very definition of their title. Is an intern a personal assistant to run errands or an unpaid student doing the same work as salaried staff? If, as several court cases have affirmed, an intern is not an “employee”, what redress do they have when they are victimized? Though the book has already spurred some inquiries, there are a great many questions that need to be addressed in the near future.

In this edition, Perlin’s afterword acknowledges many of the small victories achieved since the book’s initial publication. He recalls Occupy Wall Street protesters chanting “Fuck unpaid internships” and companies attempting to transition to paid models but neglects to mention some of the failures. DC’s Intern Anti-Discrimination Amendment of 2009—a sure thing in Perlin’s mind when the book was written—was never implemented due to lack of funding. Still, his stance is never in question: that a bare minimum of internships should be unpaid, and only if they meet rigorous government standards for training that provides no benefit to the organization itself. Once an intern’s work has value to the company, that intern should be compensated accordingly. Perlin calls for collective organizing and outright protest to demand rights and compensation, unknowingly foreshadowing the protests that would follow his book’s publication. His cause is noble and necessary. His arguments are thorough and sound. He does not despair, in fact cites alternatives such as paid internship programs for engineers and architects as well as co-ops and apprenticeships that produce skilled technical workers. Perlin’s certainty that things can be better makes the book more than a piece of finely researched muckraking. If it drives some tangible change, Intern Nation could become a radical guidebook.