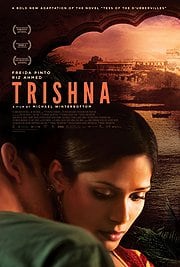 [xrr rating=2.0/5]An eclectic director with a fundamentally loose style, Michael Winterbottom dabbles in a wide variety of genres, but his fixations remain rigid, continually returning to the same themes, and the same mistakes. This is hinted at here by the source material; Trishna is his third adaptation of a Thomas Hardy novel, after Jude and The Claim a rendering of The Mayor of Casterbridge set during the California Gold Rush. Trishna transports the base story of Tess of the D’Urbervilles even further, moving it to present day India, while employing a lot of conflating and compression to fit everything in. This leaves us with a jagged portrait of title character, a beautiful peasant who gets scooped up, transformed and tossed out by the rakish son of a hotel tycoon.

The updated setting seemingly sets the stage for more precise social commentary, but this is a smokescreen, since nothing that occurs in Trishna has any special modern relevancy. Despite choosing a new location, Winterbottom just transposes the themes of the novel upon it, and there’s the sense that these broadly sketched events could happen anywhere, at least any place with a stark, inequitable divide between the rich and the poor. This leaves the film feeling hollow and vague, with a story that lacks any real sense of immediacy. The protagonist’s dalliance with the wealthy Jay (Riz Ahmed) takes up the majority of its running time, but it never feels like more than a rote windup to an inevitable tragedy.

A lot of this has to do with the fact that, for an update of a sturdy 19th century novel, Trishna is surprisingly long on loose ends. After taking up with her boss and escaping a life of poverty in Rajasthan, Trishna (Freida Pinto) settles in Mumbai, and the booming metropolis accordingly broadens her horizons. She begins a career as a dancer in a Bollywood-style production, which she’s forced to drop after Jay heads back to the sticks, taking the reins of the empire after his father falls ill. Yet this transition is handled so hastily that there’s no real sense of what the character is losing. Other characters involved in these sequences, like the friendly club promoter who seems to be hiding some devious intentions, get snipped off and disappear.

Packing in all this story under two hours leaves Trishna thin, matching its tourist-eye-view of India’s social problems, which are stressed just as much, and with about as much exploration, as the country’s natural beauty. This has been a recurring issue in Winterbottom’s films, which are possessed with a pronounced social conscience but not the curiosity or gravity to dig beyond the surface of these issues. They pick a problem, express dismay and then seize on a reductive method of resolving it, either via a small victory (the somewhat hopeful resolution to the incessant carnage of Welcome to Sarajevo) or a bloody resolution (the jaunty fire capping The Killer Inside Me which cemented the film’s inability to fully own the shocking violence it presented).

This means that little of the film’s tragedy has an immediate application and none of it feels especially resonant. The result is middlebrow fluff; another in a series of pictorial guides to suffering in exotic nations. This mini-genre has its own specific guidelines, reinforcing the natural beauty of a place to better contrast with the suffering occurring within it, finding a specific, eye-catching vessel for that suffering, and then subjecting them to a variety of indignities. Readers of the novel will know how this all turns out, and the combination of familiar story and boilerplate structure means that the rest of us probably will too.