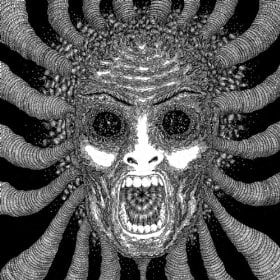 [xrr rating=4.25/5]If you still love rock ‘n’ roll—dang!—this has been quite the year for it. We’re only halfway through 2012, and already it has been proclaimed as the year of records that just flat-out rock. It’s easy to see why. Japandroids, Cloud Nothings and The Men, among others, have released high-profile albums drowned in crunchy distortion and good ol’ punk-inspired grooves that shake the listener to the core. While the ubiquity of immediate, loud, garage-like rock in today’s indie market may be viewed as a welcome change of pace from other recent trends, especially the tendency towards the atmospheric, the electronic and the chilled, there’s always a danger that we might get too much of a good thing.

Enter the always prolific, always slightly-off-kilter Ty Segall. Slaughterhouse is a high-octane tour de force, a record that sounds as if its elements were thrown together like lost strangers in a midnight train station, yet at the same time presents a unified artistic vision, one that testifies to careful planning and supreme confidence on the part of its creator. In other words, it’s a familiar, yet relentlessly individualistic addition to this year’s string of rock-your-socks-off albums. Segall has released lots of music over the past couple years in a myriad of styles with several different ensembles. Slaughterhouse is his best.

From the sea of distorted feedback that begins opener “Death” to the army of noise comprising the 10-minute closer “Fuzz War,” Slaughterhouse is a dirty, nasty album. Each tune sounds as if it’s on the verge of collapsing under the weight of its sheer heaviness. The thing that holds the record together and makes it such a pleasurable listen is the sensitivity of the songwriting craft and the outright lusciousness of the melodies. Segall and his band continually walk a tightrope between accessible pop pleasure and challenging avant-garde experimentalism.

“I Bought My Eyes” demonstrates Slaughterhouse’s funky amalgamation of styles and influences best of all. Its uber-catchy melody sits atop a simple, punky chord structure and a surf pop-inflected rhythm. A noisy, atonal guitar solo near the end sends the tune into the realm of psychedelia. The song sounds not so much like a pleasant day at the beach but rather a violent nightmare on a sandy shore in which some unspeakable danger lurks just below the water.

The record’s title, in addition to invoking the spirit of Kurt Vonnegut, is an obvious reference to The Stooges’ Fun House. As forward-looking as Segall sometimes is, it’s not surprising that much of Slaughterhouse wallows in the music of the past. He’s especially indebted to the 1960s. “The Bag I’m In” and “Diddy Wah Diddy” are both destructive covers, of a Fred Neil song and an old Bo Diddley standard (also re-imagined by Captain Beefheart), respectively.

“Tell Me What’s Inside Your Heart” wouldn’t be out of place next to “I Saw Her Standing There” on The Beatles’ Please Please Me. Just when you think Segall is giving us a straightforward, unambiguous pop song, the tune ends with a torrent of seemingly random chords. “Muscle Man” is the closest thing we get to an unadorned bubblegum tune, and it’s barely longer than a minute.

Then there’s “Fuzz War,” the 10-minute onslaught of white noise and distortion that closes the record. Is it excessive to spend one-fourth of the album’s running time on such an abstract, challenging piece? Probably. Five minutes of fuzz would do just fine. But, it seems apropros to the record’s overall aesthetic concept. Segall has spent thirty minutes searching for beauty and order amidst violent chaos. It makes sense that we should survey the desolate ruins for the final 10.