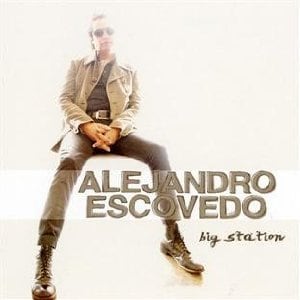 [xrr rating=3.75/5]In some ways Alejandro Escovedo hasn’t yet received the level of recognition his music deserves. Now 61 years old and having conquered hard living and a serious illness, he’s had the type of diverse career music biographers wet themselves over, starting as a punk rocker before developing his own unique style and voice on albums like 1992’s solo “debut” Gravity and 2006’s majestic, John Cale-produced The Boxing Mirror. Like Richard Thompson, he’s long been a favorite of critics and fellow musicians, but has remained a fringe artist in terms of commercial appeal, especially outside his native Austin. Inexplicably, he’s rarely shortlisted as one of today’s best songwriters.

Escovedo’s latest effort, Big Station, is another respectable entry in his catalog and shows that the lyricist’s writing is as sharp as ever. Written in large part with frequent collaborator Chuck Prophet, at the record’s most philosophical it suggests that times have changed, and not always for the better. These downcast, contemplative moments find Escovedo at his most insightful. In “Bottom Of The World” he laments his hometown’s decline – no wonder Springsteen likes the guy’s stuff – and avoids sounding overly nostalgic. The mournful “San Antonio Rain” continues in the same vein, where the comforts of a familiar city are trumped by the loneliness and boredom that come with not knowing anyone there. Topical in a way that Escovedo typically is not, “Sally Was A Cop” examines Mexico’s drug violence through a series of disturbing images, including murdered bodies lying on a highway and children digging the graves of their fathers. The song is never heavy-handed, and Escovedo – himself the son of Mexican immigrants – brings a sense of gravity to this topic without resorting to cheap tugs at the listener’s heartstrings.

Big Station is a crisp, polished recording, though it also manages to retain some of the edge of The Boxing Mirror – generally considered Escovedo’s masterpiece – and exhibits more range than 2010’s Street Songs of Love. There are still plenty of crunching, raucous songs that burst with classic Escovedo themes like rugged determination in the face of adversity and hard-earned optimism; album opener “Man Of The World” is the most obvious example, a tightly arranged rock song along the lines of “Always a Friend.” But other tracks are more nuanced: a subdued trumpet runs throughout “Sally Was A Cop,” “Can’t Make Me Run” locks into a slow, jazz-inflected groove and the woozily atmospheric “Never Stood A Chance” floats by awash in haze. Escovedo’s band and background singers are prominent, giving the songs more muscle and adding additional vocal harmonies and flourishes on almost every song, most effectively on the title track.

Some over-indulgence creeps into “Common Mistake” and “Party People,” which suffer from overzealous backing vocals and borderline-campy arrangements. These songs make the final third of the album drag slightly, though a tender, album-closing cover of Alvaro Carrillo’s “Sabor A Mi” somewhat offsets these tracks and is also notable for being the first song Escovedo has sung entirely in Spanish. A few missteps aside, Big Station reveals the musician in fine form and not settling into a predictable routine. Such rock music might sound out of time to a younger generation, but there’s still a need for the type of songs Escovedo creates, and fortunately so.