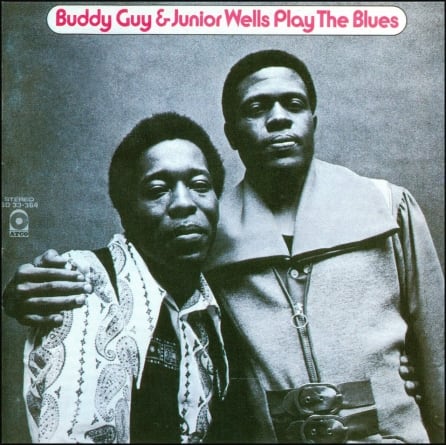 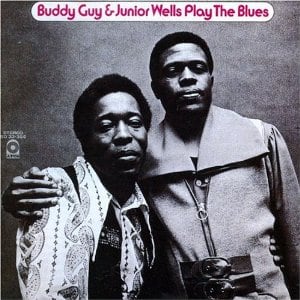 The most frequent narrative about Buddy Guy and Junior Wells Play the Blues focuses on the album’s drawn-out recording process. Sessions in Miami in 1970 with the two Chicago-based artists yielded the bulk of the 10-song record, but it wasn’t until 1972 that two additional songs were recorded and the album finally released. The album features a unique mix of performers, even by blues album standards: the Miami recordings included a not-yet-unbearable Eric Clapton, A.C Reed on sax and Dr. John on piano, while the pair of songs from 1972 were backed by the J. Geils Band, at this time primarily known for a cover version of the Valentinos’ “Looking for a Love.”

Such backgrounds usually serve as an apologia for an inconsistent, piecemeal final product, which isn’t the case with Play the Blues. Coupled with a recent import reissue that unearthed some fine bonus material, the album captures two important blues musicians at their best. Much like Kind of Blue is for jazz newcomers, in many ways Play the Blues is the perfect starter album for anyone unfamiliar with blues music or for those looking for only a quick fix. It might not be worshiped to the same degree of that Miles Davis masterpiece, but it’s a charming, and sometimes deeply moving, album that’s easy to get hooked on. Wells and Guy perform together with obvious ease, a spirit of polished collaboration that should dispel any notions of just how difficult the album was to make, or at a minimum suggest that in this instance, any such problems did not hinder either musician. It’s this compatibility that allows the two men to effortlessly execute Willie Mabon’s “I Don’t Know” as a conversational and humorous take on infidelity, and then later ring all the emotion possible out of Amos Milburn’s drunkard’s lament “Bad Bad Whiskey.”

Over half of the songs on Play the Blues are covers; the real genius behind the performances here is that it’s impossible to distinguish them from Guy’s and Wells’ own tunes. It makes the album flow seamlessly from one song to the next, in turn creating a blues primer rich with classic American imagery and themes. Guy mixes machismo with sexual boasting on the soulful, horn-driven opening “A Man of Many Words;” he later plays mesmerizing guitar on T-Bone Walker’s similarly-inclined “T-Bone Shuffle,” with the song’s lengthy instrumentals giving the rest of the players a chance to stretch out and show off a bit. The musician plays the role of lovestruck romantic on an up-tempo romp through “This Old Fool,” which includes spellbinding harmonica work as well as some of the album’s most intricate instrumental interplay.

With one notable exception – the Mel London-penned and infectiously fun “Messin’ with the Kid” – Wells’ vocals tend to be delivered slower and his subject matter a little darker. He brilliantly reworks Sonny Boy Williamson’s “My Baby Left Me (She Left Me a Mule to Ride)” into a song of betrayal and menace. A hint of lovesick desperation creeps into the slow groove and horns of “A Poor Man’s Plea;” likewise, underneath its rollicking pace changes and expert harmonica, “Come On In This House/Have Mercy Baby” exhibits an equally dark temperament, though Wells delivers his lines with a breezy coolness and perhaps some detachment.

At this point it’s only a slight exaggeration to say that nearly every artist in the world has dabbled in making a “blues” – or , at least, blues-inspired – record. Indeed, it can be a daunting genre for a listener simply looking for an accessible, concise album for these songs rife with hard times, cold women, heartbreak and desire. Buddy Guy and Junior Wells Play the Blues is as good of a starting point as any.