I’m looking forward to The Dark Knight Rises more than I looked forward to any Christmas morning as a child. Hell, I’m looking forward to the conclusion of Christopher Nolan’s Batman trilogy more than all Christmas mornings. Nolan and his collaborators raised the bar for comic book movies to unprecedented heights with the one-two punch of Batman Begins (2005) and The Dark Knight (2008). In the span of two films, they’ve created an epic story in which gritty realism and superheroes can exist in the same world, one that mixes complex social themes and a guy kicking ass while dressed as a giant bat without collapsing under its own weight. But of course, Nolan’s blockbuster films have a precedent: Tim Burton’s Batman (1989).

While Batman can’t claim to be the first successful comic book movie (Superman: The Movie predated it by 11 years as a commercial and critical smash), it had a cultural effect that was not commonly seen in any genre of film, let alone one that had thus far produced moving picture abortions like the 1979 version of Captain America. It was a hugely profitable film, grossing more than $100 million in the first ten days of its release (the first to do so) and eventually earning over $411 million in gross sales from a $48 million budget. While the critics were more divided on the film, it had a far more important effect on pop culture as a whole: Batman was a pioneer in geek chic, in appropriating what had long been the province of nerds and making it cool.

I remember the summer it hit theaters. The posters for the film seemed everywhere, in theaters and billboards and magazines, the stark simplicity of Anton Furst’s black and gold Bat logo saying more than an action filled advertisement ever could. Once it came out, the logo became ubiquitous; what I was used to seeing only in the hands of my fellow dorks in Emerald City Comics, my local comic book shop, was suddenly on T-shirts everywhere, stenciled on thousands of school binders, even shaved into high top fades (it was the 1980s, after all). And I loved it, same as any fanboy. But 23 years later, in the cold light of day, it is clear to me: Batman is an awful movie. 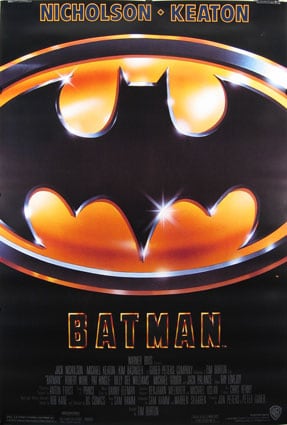 As a dedicated nerd, it pains me to realize this. After all, the success of Batman made virtually every other good comic book movie after it possible, from The Dark Knight to Hellboy to The Avengers. On the other hand, it made Batman & Robin possible. But even on its own merits, Batman is a ridiculous buffoon of a movie. It’s cartoonish when the spirit of Batman is best presented through sober darkness. It’s primarily focused on the villain (albeit a charismatic one) at the expense of the title character, one of the most psychologically complex of all popular superheroes. It completely ignores established characterization of multiple characters, based on little more than casting and the necessity to keep a script going. Worst of all, Batman was made by people who clearly don’t know comics and don’t really understand them.

The first offense of Batman is perhaps the most understandable one. After all, the most popular iteration of Batman in mass media prior to it was the 1960s television version, a campy laughingstock played by Adam West. It makes a little sense that they’d attempt to coast on the flashy, colorful aspect of “Batman” the show, and even more when Burton was involved, a director who yearns to make reality a grotesque cartoon at every turn. This makes it that much more surprising that Batman was viewed as dark and disturbingly adult; no less a critic than Gene Siskel called it “refreshingly adult.” Which is odd, because it’s a giant cornball of a movie. Yes, people die and yes, the Joker (Jack Nicholson version) is kind of scary. But you know what else? Gotham City as envisioned by Burton and Furst is a big playground for goth kids, all giant stone architecture and vats of mysterious chemicals. The criminals in Batman, even before Jack Napier’s transformation into the Joker, are straight out of a shitty gangster movie, a bunch of pinstripe cardboard cutouts that would have been rejected from a bad Godfather knockoff. The movie has a soundtrack by Prince, for God’s sake. And not even just a closing theme song (although yes, “Batdance” exists and is a thing), but songs by the Purple One that play diegetically as criminals in berets slap paint around a museum. Everything about the film is played to the rafters; it’s an exaggerated, camptastic movie that was somehow viewed as dark. Batman wasn’t a departure from the Adam West show, it was an extension of it.

Secondly, Batman isn’t really about Batman (Michael Keaton). It’s an origin story for the Joker. In 1989, Nicholson was a star. He was an icon. He was in Easy Rider, Chinatown and Five Easy Pieces. In the other corner, Keaton had been in a movie about a morgue turned call girl service (Night Shift), one about a guy who learns housekeeping (Mr. Mom) and Burton’s own Beetlejuice. There’s not really a question which one’s going to get the most screen time. But here’s the thing: it’s still Batman. He’s one of the most ambiguous characters in comic book history. He can be seen as a rich man who takes the law into his own hands, a mentally damaged child of privilege who sees the world only through his own compulsions. He can be seen as an eternally wounded, overcompensating child who just wants no one else to be hurt like he was. He can be seen as a grown man who dresses up like Dracula. But all of this is glossed over so Nicholson can caper and overact through the film, his only real transformation as a character going from murderous, crazy thug to even more murderous, crazier thug with a Glasgow smile and bleached skin. It’s not even a complex view of the Joker (a complicated character in his own right), just a bad guy who got worse. Even the plot demonstrates how the film is structured to feature Nicholson over the eponymous hero; the Joker’s origin in the Axis Chemical factory is a prominent, vital scene, while Batman is presented fully formed, his beginnings relegated to flashbacks. According to screenwriter Sam Hamm, “You totally destroy your credibility if you show the literal process by which Bruce Wayne becomes Batman,” which totally makes sense until you realize it’s bullshit. The existence of the successful Batman Begins belies that, and no mystery is being preserved by hiding his origin, since it’s been one of the most famous in comic books for decades. It’s not a stylistic choice to feature the Joker over Batman in his own movie. It’s Hollywood politics.

In a related note, Keaton is a fine actor with fantastic comic timing. But as many pointed out at the time, casting him as Bruce Wayne was a terrible decision. He’s physically unintimidating and while charming in a laidback kind of way, he doesn’t have the aristocratic sense of entitlement that forms the backbone of Wayne. Batman is a lot of things, but a frizzy haired guy with a pocketful of quips, he’s not. There’s a telling scene in which Wayne, having dinner with reporter Vicki Vale (Kim Basinger), grows uncomfortable in one of the vast dining rooms of Wayne Manor and relocates to a cozy kitchen with his loyal butler Alfred (Michael Gough). Does it make the viewer empathize with Wayne, not wanting to be in a cold, detached room? Sure. But Wayne grew up in those kinds of rooms, in being cold and detached from the rest of society due to both his wealth and his trauma. It just doesn’t make any sense with the characterization of Batman; it comes off as a play to make Batman more likable with audiences. Similarly, at a later point in the film, the aforementioned loyal butler makes an executive decision and lets Vale into the Batcave, exposing his lifelong employer and surrogate son’s secret identity to a journalist he’s only known for a few months. It’s good to build up a romantic subplot, but has jack shit to do with decades of established character. I won’t even get into the Joker’s secret past as the gunman who shot down the Wayne parents, solely to provide a sense of self-satisfaction for writers who like dovetailing stories.

And you could say, it’s a movie adaptation, it doesn’t have to stick exactly to established character traits. And you’d be wrong. Very wrong. But that does show exactly where Burton and Hamm were coming from. Burton has been open in interviews since Batman that he is not a comic book fan, and his lack of understanding of the medium is evident. Instead of taking the elements of the best Batman comics that are most lasting and profound (the grittiness and anger of The Dark Knight Returns, the parallels and tragedy of The Killing Joke) and using them in a cinematic fashion, he merely tried to paste the look and feel of a stereotypical comic book onto the big screen. Batman is a live action cartoon, because the people behind the film didn’t realize the themes behind the characters are what’s important, not the cheesy visuals and capes. That’s why the movie is really about boosting Nicholson’s career instead of Batman, because they wanted to make a Hollywood movie with a built in fan base, not tell a story based in what comics had developed over decades. That’s why they assumed they could just put an actor in the suit and assume the clothes would make the bat. Batman is a bad movie for a lot of reasons, but they all boil down to a simple one: the people behind a comic book movie simply didn’t care about the comic book. That, and “Batdance.”