September 29, 2020
Home Music Kelly Hogan: I Like to Keep Myself in Pain 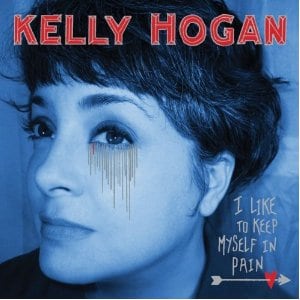 [xrr rating=4.0/5]Even though Kelly Hogan started recording in the early ’90s, she’s most widely known as a backup vocalist, and often only by fellow musicians and bandmates who’ve heard her in action. Hogan’s voice is a powerful and dynamic one that A-list performers throughout the industry have incorporated into their music. She’s a full-time member of Neko Case’s band — the added ingredient that makes most of Case’s soaring harmonies sparkle. She’s also played with acts as varied as Will Oldham and Mavis Staples. I Like to Keep Myself in Pain is her third solo outing and the first one to really make a case for Hogan as one of music’s hidden treasures. Not only are Hogan’s performances as technically proficient as they come, she cashed in a few favors and got a whole list of big names to pen songs for her, including Andrew Bird, Robyn Hitchcock, M. Ward and Stephen Merritt.

Pain also features what would prove to be one of the last songs Vic Chesnutt wrote before his death in 2009 and it’s a mid-album doozy created especially for Hogan. She comfortably inhabits a number of different characters from song to song — Frank Sinatra on M. Ward’s contribution is a notable one — but Chesnutt’s “Ways of the World” features one of many broken women, this one resigned to an unhappy Southern life living out the role she’s expected to fill. It’s a darkly beautiful track and fits logically in Chesnutt’s varied catalog, but Hogan’s voice is the song’s distinguishing feature. Gothic organ and acoustic guitar flutter ominously behind one of Hogan’s more throaty deliveries, subtle notes of anger and resentment as obvious in her impressive range as they are in Chesnutt’s typically-expert language. On more folk-tinged tracks Hogan’s voice has a way of blushing like Jenny Lewis’, but also allows for the kind of barbed delivery fans would expect on a Chesnutt original.

That’s consistently the case throughout Pain, an album full of tracks written by other iconic musicians known for their distinct writing styles. It’s rarely obvious that Hogan is performing another artist’s track, especially ones with such famously idiosyncratic styles as Andrew Bird and Stephen Merritt, because she absolutely owns these songs, often without anything more than a simple, stately vocal. Andrew Bird contributed the music for powerful blues number “We Can’t Have Nice Things” and it sounds nothing like his usual hyper-constructed fare, and Hogan manages to distract from Robyn Hitchcock’s signature styling on the phenomenal title track, too (it helps that she really belts out a few killer bars towards the end of the song). But there are also tracks like Merritt’s “Plant White Roses” that incorporate his usually vivid imagery, or “The Green Willow Valley” that would have made for a (slightly less) haunting track if The Handsome Family’s Brett and Rennie Sparks had saved it for themselves. For being a serial collaborator of impressive renown, Hogan is remarkably adept at making her mark on tracks from some of popular music’s most distinct voices; then again, they wrote these songs especially for her, and these friends, coworkers and admirers apparently understood Hogan’s worth before the rest of us.

And Hogan’s one songwriting credit fits right in with these other more notable songwriters. “Golden” gives Hogan plenty of room to work, sticking to a steady midtempo path and leaving plenty of open air around her blissfully sweet solo. It’s one of the album’s exceptional blues-rock songs but I Like to Keep Myself in Pain is full of impressive work across many different styles. Hogan is more than capable of handling modern country a la Neko Case or much more traditional crooners, Americana folk, sunny pop (the shimmering “Sleeper Awake”), Gospel, soulful rock and even lounge-ready performances like “Slumber’s Sympathy.” Her backup band — as impressive as any other element of this project, including Booker T. Jones, James Gadson, Nora O’Connor and Hogan collaborator Scott Ligon — handles all those different styles just as competently, throwing in dexterous instrumentation to match southern twang and stomping blues. I Like to keep Myself in Pain makes it very clear why Kelly Hogan is such a sought-after collaborator, but also demands future opportunities for her to lead instead.