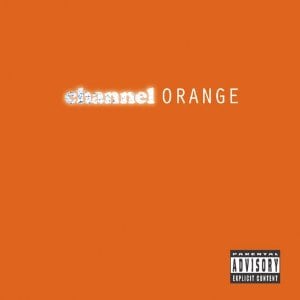 [xrr rating=3.5/5]The Odd Future hype machine keeps rolling forward, and it’s up to you to believe it. Though Frank Ocean’s musical career predated his involvement with the L.A. hip-hop collective, he’s gained widespread visibility through his association with them. And why not? In a group full of live action cartoons and clumsy provocateurs, his cool, quiet passion set him apart from his peers, as did his songwriting chops; after all, you don’t get to write tunes for Justin Bieber without some serious talent. After a widely seen performance on “Late Night with Jimmy Fallon” (the same program that broke Odd Future to the public at large) and a blog post, Ocean has released his official debut, channel Orange, to an unprecedented level of cultural discussion. But after the hype, how good is it?

Short answer: pretty damn solid. While Ocean has resisted being boxed in as a strictly R&B singer, channel ORANGE is based in the formula of slinky, sensual R&B. It’s an album full of smooth synthesizers, keyboards, understated beats and multi-tracked vocals. But it’s not quite an R. Kelly knock-off, either; Ocean approaches his medium with a stronger grasp of self-consciousness than simply singing about sex over throbbing rhythms. channel ORANGE evokes two other recent musical acts that benefited from the word of mouth blogosphere, the Weeknd and How to Dress Well. While Ocean’s music belongs in the same world of nostalgia, drug abuse, listlessness and doomed romance as those two, he doesn’t quite have the grueling intensity of Abel Tesfaye or the experimentalism of Tom Krell, respectively. If anything, the album sometimes accidentally reveals Ocean’s limits as a singer compared to the two, or to most soulful vocalists. On the other hand, the songs on channel ORANGE are far more radio friendly than the sometimes squirm-inducing lyrics of the former and decidedly more professionally produced than the latter, which speaks well for his commercial prospects.

And make no mistake about that part, channel ORANGE is designed to make Ocean a star. Clocking in 17 tracks, the album feels occasionally overstuffed, but there’s more than one entry here that’s sure to be a radio hit (in a cleaned up version, of course). After several tracks that don’t really go anywhere or deliver a hook, “Sweet Life” gets to the point, a powerful bassline combined with distant keyboards and Ocean’s voice layered everywhere. More importantly, it sets the tone lyrically for the rest of the album. With a chorus like, “So why see the world, when you got the beach,” Ocean delves into a world of privileged, bored California youth, both exuberant in their pleasure and dripping with early-onset ennui. “Super Rich Kids (feat. Earl Sweatshirt)” is even better, supported by a piano line borderline ripped from Elton John’s “Benny and the Jets” and a laconic, scene-stealing turn by the increasingly mythologized Earl.

channel ORANGE rarely hits the same level of catchiness as “Super Rich Kids” in the rest of the album, but it’s definitely backloaded with solid tracks. “Bad Religion” is buoyed by a delicate organ melody and spare handclaps, while the gloomy “Pink Matter (feat. Andre 3000)” showcases some of Ocean’s most emotive singing as well as solid guest verse from the Outkast frontman. However, only the nearly-10 minute “Pyramids” lives up to the ecstatic billing of Ocean as a songwriting prodigy, packing multiple stylistic shifts, club ready beats and bizarre, intriguing metaphors linking Cleopatra and a stripper into a single track. But two wholly impressive tracks on an album don’t make a genius.

Any musician has a lot riding on their debut album, and nobody ever wants to fail. But levels of pop culture expectation often don’t have much to do with the substance of a release, and everything to do with what we want to be there. Ocean’s descriptions of bored, rich teens behaving badly in SoCal may be mistaken for depth, but that story was tired long before Bret Easton Ellis ran it into the ground. Similarly, he’s unarguably a precociously talented musician, but still a young one developing his skills. channel ORANGE is a solid but uneven first official release by a gifted singer-songwriter, but it’s not a game-changing album. Once the hype begins to turn, hopefully listeners can appreciate Ocean for what he is and does, and not for what we want him to be.