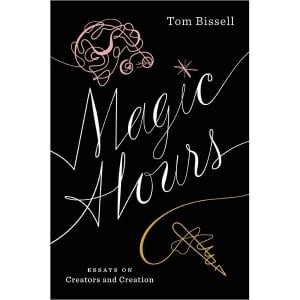 [xrr rating=4.0/5]Journalism, criticism and personal essay-writing are each noble pursuits; do all three at once and you risk messy ostentation – or worse. But the best pieces in journalist/critic/essayist Tom Bissell’s Magic Hours pull off the hat trick with grace, humility and humor. This guy makes it look easy.

The book’s subtitle is “Essays On Creators and Creation,” promising an arts focus that might lead you to expect something similar to the cultural obsessions of Jonathan Lethem. But where Lethem is intensely introspective, using culture to map his labyrinthine journeys of self, Bissell always prioritizes thoughtful scrutiny of other people’s work, whatever autobiographical indulgences he allows along the way. Bissell is also more single-minded in his enthusiasms: eight of the 14 essays in Magic Hours deal with literature or writing, and the remainder comprises only film/TV pieces (except one that’s sort of about video games). But lack of variety is hardly a problem when Bissell is, in most cases, clearly writing about what means the most to him—even in pieces produced in the deadline-driven world of journalism rather than the rarefied sphere of literature.

I’ll amend that statement slightly: there are a couple of bog-standard New Yorker profiles here—one about sitcom producer Chuck Lorre, and one about video game voice-over actress Jennifer Hale—in which Bissell refrains from inserting much of his own perspective. These are by far the weakest parts of the book, sufficiently compelling but devoid of true insight. (It’s almost maddening that someone as smart as Bissell got so close to someone as arguably ruinous as Lorre without challenging him in any way, even ex-post-facto.) In the collection’s highlights, by contrast, Bissell spruces up traditional journalism by applying his sharp critical faculties and close-reading skills—with a dash of personal confession.

When Bissell does express a viewpoint toward his subjects, his attitudes range from ambivalent (regarding a quixotic writers’ collective called the Underground Literary Alliance), to coruscating (regarding the work of journalist and spurious “world affairs expert” Robert D. Kaplan), to celebratory (regarding filmmaker Werner Herzog, whose work and personality are of equal interest to Bissell’s hybrid critic-journalist mind). But he always favors nuanced engagement with texts and individuals over the generalized opinion-mongering that often dominates internet-era cultural discourse. Like all good critics, his identity is as much reader as writer. In “Writing About Writing About Writing,” Bissell makes a remarkably thorough inventory of various writing guidebooks, demonstrating an intimate familiarity with each book’s uses and drawbacks, classifying and critiquing them far beyond the seemingly limited niche appeal of such an endeavor.

As a lapsed fiction writer, Bissell also has more empathy than your average critic; he often attempts to understand or defend easily dismissible figures like the clownishly clueless ULA members or, memorably, The Room’s Tommy Wiseau—a contemporary Ed Wood who has become the laughingstock of a generation of midnight moviegoers. “The Room’s last remaining ritual of audience participation might be for everyone to imagine seeing one’s most deeply personal attempt at self-expression razed by a hurricane of laughter,” Bissell writes, noting that Wiseau (present for an L.A. screening) seemed like “an unfortunate cultic animal we had all come together to stab at the stroke of midnight.” That “we” is important—the author is condemning the act of laughing in this mentally askew artist’s face, but not excluding himself from the condemned. Bissell has a gift for these sensitive kickers, finishes that beautifully reframe the essay’s topic in emotional terms. One of the shorter pieces is a gentle reflection on David Foster Wallace’s famous commencement address, and the moving moments of Magic Hours place Bissell on an echelon not too far from Wallace’s. The title is more literal than you think.