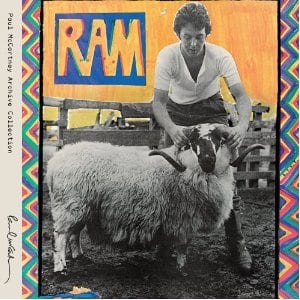 There comes a time in every music writer’s life which he must face the unthinkable: trying to say something new about a Beatle. Each of the fabulous quartet have been analyzed, re-analyzed, over-analyzed and re-contextualized to the point at which it seems useless to delve into their stories and music. But that’s what I’m here for, and that’s what you’re going to get. As part of his ongoing series of reissues, Paul McCartney has re-released one of the quirkier albums of his career, Ram, to new found inspection and adulation. And frankly, we should be grateful for that. While it’s difficult to consider a world in which even a solo Beatle release is treated with disdain (well, maybe something by Ringo), it’s staggering to think that Ram was nearly universally regarded as a critical failure when first released in 1971.

Strange but true. The other three Beatles hated it. John Lennon mocked the album cover of McCartney holding a ram by the horns (get it?) by inserting a picture of himself grasping a pig’s ears (GET IT?) in his own Imagine. The media hated it, considering it a lightweight, inconsequential work. Of course, given that it was a McCartney release in 1971, it still was a commercial smash, but that wasn’t what the cute Beatle needed after the most high profile band dissolution in history. He needed to be seen as independent of the band, of being his own man, his own songwriter. And he thought he could achieve that in a partnership with his wife Linda.

Ram is the only album credited to both Paul and Linda McCartney, and to tell the truth, it’s difficult to tell what contributions she may have made. While half of the 12 tracks are credited as jointly written, it’s a little hard to make out what she added beyond backing vocals to one of the greatest crafters of pop music in history. This isn’t a detriment to the late Mrs. McCartney but simply an acknowledgement that anything McCartney put his hand to in this era bore his mark. He’s simply too strong a creator not to rise to the fore, regardless of joint credit.

While Ram has transcended the decades to be seen as a collection of quirky, masterful pop songs, it’s somewhat understandable why critics at the time hated it so. In the same time period, his former bandmates had released some of their strongest and most personal works: Lennon with Plastic Ono Band, a raw piece of humanity at its most honest, and George Harrison with All Things Must Pass, a masterpiece of pent up talent expelling itself in triple album form. Set next to those, Ram does seem lightweight, but it is a piece of equal ambition steered in another direction. After the orchestral majesties of his time in the Beatles, Ram is a comparatively simple, light-hearted album and it’s more interesting for that. It’s not the kind of album that shoots for the naked depths of Lennon or the spiritual highs of Harrison. Instead, it’s a warm, earthy album, something less personal and yet more inviting at times.

Part of the animosity towards Ram can probably also be attributed to its ramshackle quality. While McCartney has always come off as a perfectionist, both in his music and his image-making, Ram feels less like a cohesive, flowing album and more like a collection of pop songs knocked off the top of his head. Of course, since it’s McCartney, off the top of his head means the dreamy ukulele melody of “Ram On,” the delicate instrumentation and soaring chorus of “Long Haired Lady” and the ferociously snide “Too Many People.” There’s not a single weak track on the album; the only reason I can’t give it a perfect rating is that same disorganized quality that is part of its charm still throws it off in terms of tracking.

Regardless, Ram contains some of the highest, most memorable moments of McCartney’s solo career, like the mini-suite “Uncle Albert/Admiral Halsey,” the bizarre “Monkberry Moon Delight” and “Dear Boy,” a song that somehow manages to beautifully marry sorrow with a sneer. In one of the most notable careers in pop music, Ram is a highlight, albeit one that’s only now being recovered and acknowledged by the critical community. It’s not a perfect album by any means, but it’s an album of supreme skill and confidence. Sometimes, that’s even better than perfect.