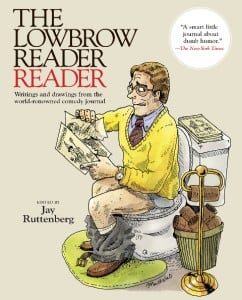 [xrr rating=3.0/5]I’m a snob. I enjoy snobby things, and behaving snobbily. I often eat cheese that is not packaged individually, and am known to watch movies that don’t require 3D glasses. But here’s a confession: I’m actually pretty into trashy culture, or at least what snobs consider to be trashy. I quote Billy Madison more often than Punch-Drunk Love, I eat a cheeseburger at least three days out of a given week, and so forth. What I’m saying is, I feel pretty qualified to critique The Lowbrow Reader Reader, a collection of articles from the New York City based zine of the same name (minus one “Reader,” that is). Founded in 2001 by editor Jay Ruttenberg, the zine is focused on two primary elements: crass comedy and in depth essays on little-critiqued popular culture.

As it is, The Lowbrow Reader Reader serves as a best-of compilation, which has a plus and a minus. On the positive side, a number of the articles included are fascinating, poignant and/or hilarious, particularly when examining the works of famed but critically denigrated comedians. On the downside, some of what The Lowbrow Reader is, to put it simply, dumb. Really dumb. Like, ridiculously dumb, and that’s coming from someone who will laugh at literally any pun involving any animal. And there’s a small problem with critiquing those articles: after all, lowbrow is in the name. Presumably the contributing writers (who include David Berman, Patton Oswalt and Lee Hazlewood, just to mention a bizarre cross-section) aren’t going for the most sophisticated or subtle of points, but there’s a certain level of competency to be expected in any publication, regardless of its ethos. In particular, a number of the illustrations and cartoons included cross the line from naïve/clumsy to plain ugly and unremarkable, the kind of crudely drawn sketches you might find illuminating a bus stop near a middle school. And I don’t believe I’m missing the point of their mission statement; there’s a difference between lowbrow and simply poor quality.

And, case in point, The Lowbrow Reader’s most successful articles delve deeply and fascinatingly into subjects that are rarely critically analyzed, largely due to being considered too ill-bred and thick of skull for most cultural judges. In particular, an essay by Ruttenberg on the merits of the aforementioned film Billy Madison works brilliantly, functioning as both an examination of the writer’s tastes and Adam Sandler’s career as a whole. It’s an amazing piece of writing, both a critique of the film (and its star) and a celebration of its unique, crass humor. Similarly two back to back articles making the case against and case for Chevy Chase (by Ben Goldberg and Joe O’Brien, respectively) are interesting for their evenhanded approach (and even more interesting considered Chase’s public revival with “Community”). Even a few of the briefer articles, like an interview with the late Ol’ Dirty Bastard that was so brief and uninformative that it had to be rewritten as an interview with the interviewer herself, are fine, if quickly dismissed reads.

As a zine, The Lowbrow Reader must be commended: Ruttenberg and his contributors have taken on a largely dismissed task, defended the vulgar and the dumb of the world. It’s very easy to disregard comedy as a whole, particularly the elements that seem on their surface to be lowest common denominator and nothing but goofs. What the Lowbrow Reader does is to show in condensed fashion how often those critics don’t bother to look under the surface and find hidden depths and laughter. But as The Lowbrow Reader Reader also shows, sometimes under the surface, it’s still just plain dumb.