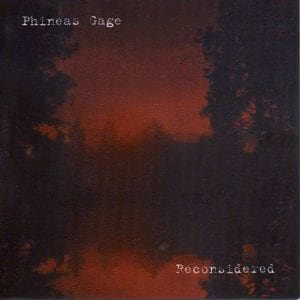 There are certain years in music when there seemed to be something new and exciting coming out almost every single week. 2000 was one of those years. Just scratching the surface, it was the year Radiohead released the game-changing Kid A, Modest Mouse made their major label debut, Sigur Rós made an international splash with the achingly gorgeous Ágætis Byrjun (initially released a year prior overseas) and OutKast took hip-hop to new places with Stankonia. With so much amazing music hitting stores (remember them?) it’s inevitable that a few great albums would get lost in the shuffle. Reconsidered by Phineas Gage was one of those albums that never caught on with a lot of people, but probably could have found itself a fan-base if more people had the chance to hear it.

Named after a railroad foreman who famously survived getting an iron rod driven through his skull in 1848, Phineas Gage members Patrick Porter and Josh Wambeke operated out Denver, yet released their one and only full-length album on Camera Obscura, a small Australian label which was home to a handful of psychedelic acts from all over the globe. Porter and Wambeke were possessed by do-it-yourself spirit of independent music (perhaps out of necessity, as I’m sure they weren’t embraced with open arms in a city as rock-challenged as Denver), recording the album themselves in a basement, with each of them writing, singing and playing multiple instruments on the album’s nine songs.

While reviewers referred to Reconsidered as either shoegaze, space rock or psychedelic rock, those genre-tags only describe a part of Phineas Gage’s sound. Listening to it now, I hear a very specific and unique music defined by its slow and elegant drifting qualities, with a beguiling ambience that elevates it far beyond its basement-level origins into something majestic and ethereal sounding. That ethereal sound is what makes the band special, and is largely derived from the tremendous reverb sound they were able to achieve (it’s worth noting that prior to Reconsidered Patrick Porter released a solo album called Reverb Saved My Life), which creates a sense of expansive space. It’s not outer space though. The space Phineas Gage evokes is harder to define (which is a good thing), but it’s something closer to the barren forests that were photographed for the CD booklet.

If you‘re looking for musical signposts in Phineas Gage‘s music, there are songs on Reconsidered, like “Kite” and “Fall All Around Me”, where the languid pacing and hushed vocals recall some of Pink Floyd’s early-‘70s work, but the sense of alienation and outsider’s perspective of the lyrics is something that comes straight from American indie-rock. As if to prove they’re capable of playing more than just slow pretty songs, they turn the volume up surprisingly loud for “Some Cheap Christ”, which has some of the same bludgeoning grunge-thud heard on Nirvana’s Bleach, albeit coupled with big sweeping guitar sounds that could easily have come from a Ride album.

For whatever reason, Reconsidered only found its way into a few psych-rock devotees’ record collections and Patrick Porter and Josh Wambeke parted ways soon after it came out. Porter has since relocated to New York and has been keeping himself busy with various solo recordings, novels, poetry collections and painting. Wambeke remains in Denver where he has released three albums with a band named Fell and has recently been fronting a new band called the Morning Clouds. A Phineas Gage reunion probably isn’t going to happen anytime soon – another band has since adopted the name – and it’s likely that only a few people would notice if it did. Nevertheless, the album they left behind is an unheard classic, and absolutely worth seeking out.