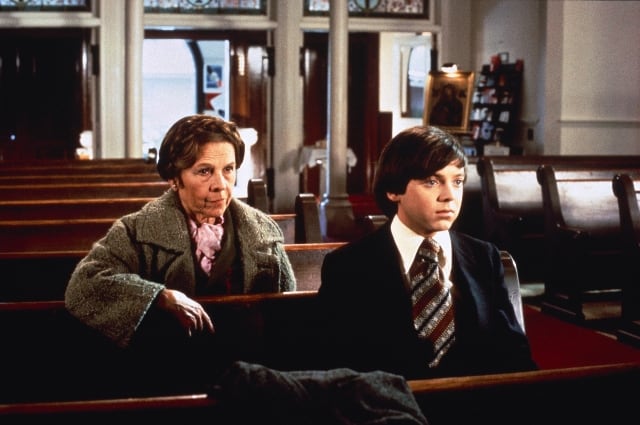 I recently revisited Harold and Maude for the first time since my junior year in high school. The earlier viewing took place when my friends and I decided to have a “depressing film festival” at my house during an ice storm and queued up Hal Ashby’s classic (along with Pink Floyd The Wall) on the VCR. Harold and Maude makes perfect sense to a teenager. Bud Cort perfectly embodies the alienation and distrust of adults that many of us experienced when we were young. While we saw the yen to bed an 80-year-old woman as just a quixotic by-product of the movie, Maude (Ruth Gordon) did embody the freewheelin’ liberty many of us knew would end soon enough. It was simple and attractive and not really that depressing at all.

Watching Harold and Maude as an adult is a very different animal. Looking at through the lens of history, the film is the embodiment of the hippie dream that already began to dissipate in 1971, the year of its release. Maude is the embodiment of the basic virtues of the Summer of Love movement, standing for love, freedom, the ability to fly your own freak flag in the face of authority while Harold is a prescient representation of the pent-up anger that marked the ‘70s. It’s no mistake that Ashby casts Maude on the eve of her 80th birthday. While she is still set in idyllic ways, she is now a dinosaur in the world of Nixon, a president who was elected as a reaction against the liberal mindset of the late ‘60s. Maude is on her way out (and on her own terms) but not before she instills her virtues on the morose Harold. 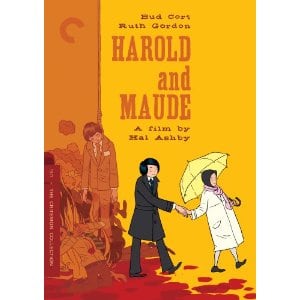 Filmed in the Bay Area but given the bucolic feeling of a British production, Harold and Maude can be read in many ways other than a polemic. It’s a love story, a dark comedy, a piercing look at the changing mores of an America moving away from the Summer of Love. Harold’s disaffection is palpable to anyone who felt they weren’t made for their times and, although the idea of a 20-year-old making love to an 80-year-old reads icky on paper, Ashby is able to create a relationship that is both tender and somewhat absurd.

The film opens with a pasty Harold slowly hanging himself in the richly ornate dining room of his mother’s manse. She enters as his body slowly sways from the rope, blithely chattering away. She’s seen this before. This is just one of his games. See, Harold is a glum young man who confesses to his shrink that he is most happy when attending funerals, even if they are people he does not know. It’s at a funeral that he meets Maude, a kindred spirit even if he doesn’t know it yet.

Maude is an eccentric who lives in a converted train car filled with strange art. She steals cars not out of guile but because she doesn’t really care about private property. Harold is tentatively attracted to Maude’s joie de vivre, a joy that trumps her past as a Holocaust survivor. Gordon, also known for her masterful turn in Rosemary’s Baby (1968), sinks her teeth into what is her defining role. Her Maude is a teacher who is unwilling to let the dreams of the Counterculture flicker out. She wants to teach Harold how to sing and dance, on both a literary and metaphoric level.

Harold and Maude was not an immediate success upon its release. Roger Ebert famously dismissed it, and the film tanked at the box office. Even the inclusion of a bevy of songs from Cat Stevens, including two written expressly for the film, couldn’t bolster sagging returns. However, the film soon acquired a cult following even as Ashby’s stock as a director rose over the decade with a list of films that included The Last Detail, Shampoo and Being There.

Harold and Maude’s influence lives on today, most obviously in the work of Wes Anderson. Watching the film as an adult, I found myself resisting Maude’s whimsical flights of fancy and Harold’s sad disaffection. There is something naively innocent about it all. But I guess that’s part of the charm, something that appealed to a part of my youth that has been obliterated, lost to the stony defenses of adulthood.