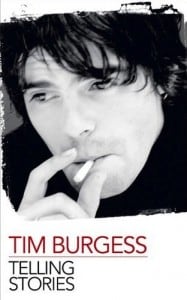 [xrr rating=2.75/5]When the Charlatans (or the Charlatans UK as they’re known here in America) debuted at the turn of the ‘90s, they were viewed as a footnote to the Madchester scene that spawned The Stone Roses. They definitely didn’t come across as a band that would last for over two decades and counting, nor did you get the sense that Charlatans frontman Tim Burgess had an autobiography in him. Yet here’s Burgess’ personal account of decades marked by fame, death, addiction, depression and the various other highs and lows that come with a career in music, given the fitting title Telling Stories.

Burgess makes the curious decision of working without the aid of a professional co-writer. You know, the person who actually knows how to organize the subject’s thoughts and stories into a concise and well-ordered book? That guy. Early in the first chapter Burgess, left to his own devices, claims he doesn’t think in chronological order like a book, but “more like a magazine or a website: in short bursts, with pictures, charts and lists.” He does this essentially to disavow himself of any of the organizational duties that writers normally have to engage in, but screw that. I’m going to indulge him on this one. I don’t always want to organize my thoughts into a cohesive whole either, and I also like lists. So, without further adieu, here’s my list of five things in Telling Stories that made me dislike Tim Burgess:

1. When he mentions the terrorist attacks of 9/11, he could have reflected on what the experience was like for him as a transplanted Brit living in L.A. But he has just five words on the subject: “The autumn tour was cancelled.” Deep stuff, Burgess. I’m sure America will never forget your sacrifices during that historic time.

2. His obsession with namedropping celebrities, sometimes without any reason except to let you know that he knows them. Page 150 is literally just a list of celebrity encounters! After awhile I began to wonder if a better title for the book wouldn’t be “I Know Ron Wood! Really, I Do!”

3. His track-by track-breakdown of Charlatans albums Some Friendly and You Cross My Path is pretty much just a laundry list of things he lifted from other bands (usually New Order).

4. Talking about opening two days worth of Oasis gigs at Knebworth in front of 250,000 people, Burgess actually says, “Yes it was Oasis’ crowd, but we were the band of the day.” Actually, he referred to it as “Oasis’s crowd,” which is grammatically wrong. Anyway, even though it was the first Charlatans concert since the death of keyboardist Rob Collins, and surely an emotional day for everyone involved, trying to take such a huge show away from the headliners comes off as childish and unappreciative.

5. He completely ignores important areas of his life (for example, anything from before the age of 15) but includes such “enriching” pieces as “Ten Reasons Why Paul Weller Has Made My Life Richer” (reason number nine is simply “loafers“), his thoughts on film and a five page appreciation of Mark. E. Smith and the Fall.

Again, a co-writer probably would have pulled Burgess aside at some point and said, “Dude, your book makes you out to be a self-obsessed star-fucker that wants all the finer things in life without putting in any hard work to get it” and shaped his story in a way that shows him in a better light. However, as much as Burgess is often a shallow subject, you don’t necessarily have to like the person you’re reading about to enjoy a book, and, despite its many faults Telling Stories has just enough juicy tales to hold a rock-bio junkie‘s interest for its 233 pages. After all, it’s not every day you get to hear an author recount their experiences giving and receiving in the practice of blowing cocaine up one’s ass (in a chapter with the brilliant title “Cocainus”). Oddly enough, this embarrassing and downright ludicrous chapter has Burgess’ best writing, peppering in some of the self-deprecating humor and humility that’s sorely missing everywhere else.