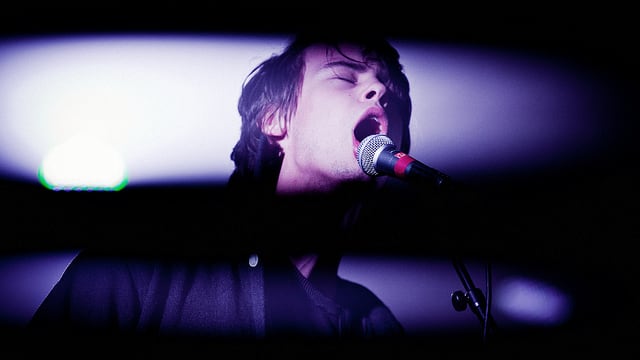 It has been excessively hot in Chicago this summer. It’s the kind of relentlessly oppressive heat that leaves one paralyzed and defeated, wanting to do nothing but lie on the couch and whittle down that pesky Netflix instant queue for hours at a time. Nevertheless, on a recent scorching Monday evening, I dutifully trekked over to Wicker Park, the unofficial hipster capital of the Midwest, to check out Iceage, a band of teenagers from Copenhagen, Denmark who got quite the buzz on the indie blogs last year. The group, adroitly walking the high wire between punk and post-punk, invaded Subterranean the day after a lauded appearance at the Pitchfork Music Festival. Iceage’s main opening act for the all-ages show was fellow Pitchfork-playing punks Milk Music, a quartet of twentysomethings from Olympia. Both bands heated up an already humid, muggy club with concise sets full of youthful aggression and unbridled passion.

Before the two buzz bands took the stage, the audience members who showed up at 7:00pm sharp were treated to brief sets from two relatively new hardcore bands from Chicagoland’s thriving local punk scene. Skrapyard excelled at playing with exceptional clarity at breakneck tempos, whereas Ooze made hardcore seem beautiful with their ultra-melodic guitar riffs. While each band played only about 10 minutes, they left me wanting more.

The small, yet dedicated crowd that showed up for the two underground openers swelled into a larger, near-capacity mass as Milk Music took the stage. The band is still somewhat underground itself, since it only has an EP and a cassette to its name. But, the group is putting finishing touches on an LP to be released later this year. The band has positioned itself solidly in the 1980s SST-inspired hardcore realm, though there are influences from classic rock as well. The ghost of Hüsker Dü also hangs over the group in their turbulent grooves and catchy melodies. Milk Music’s set was plagued by a few sound problems. Lead singer Alex Coxen repeatedly mentioned not being able to hear well on stage. These difficulties didn’t really detract from the band’s well-crafted tunes and tangible chemistry.

The young crowd became hotter and sweatier as they started to mosh during Milk Music’s set. As Iceage prepared to take the stage, I thought about the photos that have surfaced on the web over the past year showing the aftermath of the Danish group’s shows. I was expecting blood, sweat, broken guitar strings and maybe even vomit by the time the set was through. I have no lurid tales to report of grisly band or audience antics. There was plenty of sweat, though. There was also a good deal of stage diving and moshing. Otherwise, the spotlight was on the talent of leader Elias Bender Rønnenfelt and company. Over the course of 30 minutes or so, it became clear that much of the hype surrounding this band is deserved. Last year’s record, New Brigade, introduced North America to a band that combined the dark, sometimes politically controversial imagery of Scandinavian goth with the rhythmic and melodic vitality of punk. The group played through most of the album’s 12 tunes with no banter in between songs. Given the fact that Rønnenfelt’s ambiguous lyrics are virtually impossible to make out—on record or on stage—the set was, de facto, wordless. It was all about the music, and the band meant business.

The highlights of Iceage’s live show were analogous to the best moments on New Brigade. The crackling drums and choppy guitar riff on “White Rune,” the complex polyrhythms of “Remember” and the so-brisk-you-might-miss-it virtuosity of “Count Me In” all killed. If there was a theme of this sweltering night in Wicker Park, it was a celebration of novice punk-inflected bands that have bright futures ahead of them. Let’s just hope they all live up to the promise of their youth.