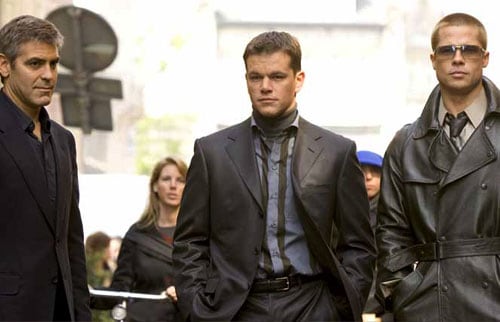 Steven Soderbergh stands as modern Hollywood’s closest approximation to the great studio hands of its Golden Age, aggressively stylish but vaguely invisible, capable of working across multiple genres and leaving an idiosyncratic imprint upon all of them. This year alone, Soderbergh has made a kung-fu movie that feels more like a jazzy un-caper and a stripper movie redolent of Verhoeven’s Showgirls, provided one swapped that film’s satire of fin du vingtième siècle excess for a wry critique of post-recession disillusionment. In both cases, the director subverts expectations even further by inverting gender dynamics. Such unorthodox, deconstructive flourishes undermine his otherwise mainstream works and position Soderbergh as perhaps the most high-profile maker of termite art working in Hollywood today.

None of his features burrows under expectations like Ocean’s Twelve. Hell, this movie digs tunnels, tunnels and more tunnels until a sinkhole swallows the entire surface. Its predecessor, the culmination of Soderbergh’s late-‘90s swell of mainstream credibility and still his highest grosser, subsumed the director’s love of non-linear narrative, stylish visual jazz and breakdown of process into pure, crowd-pleasing pop. Ocean’s Twelve pushes all these successful elements to, and then past, their breaking point, offering intrigued audiences looking for a hip sequel only a relentlessly frustrating anti-movie whose greatest long con is the one played on the audience and the studio system that essentially bankrolled a paid vacation at George Clooney’s Italian villa.

A wholesale breakdown of the concept of a movie sequel and the typical qualities of one, Ocean’s Twelve starts by all but openly admitting its unnecessary existence with the thinnest of premises: Terry Benedict (Andy Garcia), the robbed casino magnate of Ocean’s Eleven, returns out of the blue to demand repayment (plus interest, natch) from the team of thieves who embarrassed him. Terry already made his money back in insurance, and the ultimatum he gives the team serves only to give them something to do for the next two hours. Danny (Clooney) and Rusty (Brad Pitt) try to come up with another heist to raise the money, but the peevish intervention of a notorious thief (Vincent Cassel) turns the promise of yet another immaculately planned job from the crew into a loopy pissing match between rivals.

Cassel’s intrusion marks a left-field break for a movie that heretofore seemed a tedious reproduction of the first film, and Soderbergh spends the rest of the running time gleefully refusing to play to any expectation and almost daring the audience to hate him for not just serving them the same meal. The director has long favored an elliptical style of editing; indeed, part of the popular charm of Ocean’s Eleven lies in the way it placed the final pieces into the puzzle only in retrospect. Here, however, Soderbergh cuts around any grounding element and even any action. He shows the planning of the first heist, an elaborate scheme involving elevating an agoraphobic’s Venetian home to crack a safe, only to cut away just before their explosives go off and the break-in begins in earnest. Soderbergh leaps across Europe to Europol headquarters in The Hague as an assistant arduously, calmly walks the length of the building and waits with awkward propriety to interrupt the film’s head cop (Catherine Zeta-Jones, doubling as Rusty’s ex-lover, because why not?) of the theft we did not get to see. Later, Danny and Rusty pack Yen (Shaobo Qin) into yet another confined space, only for Soderbergh to instantly jump to a train station as everyone frets about Yen’s bag being sent to the wrong stop.

Balancing out this deliberate refusal to give the audience what it wants is a streak of self-reflexive humor that relies chiefly on in-jokes and the chemistry between the real life actors. For instance, Clooney spends much of the film fielding jokes about his age, his deadpan face betraying an irritation that could be his as much as “Danny’s.” Matt Damon’s character, Linus, constantly seeks to establish a more prominent role in the group, seemingly for no other reason than, in the interim between Eleven and Twelve, Damon himself got more famous. Bruce Willis shows up for a cameo as himself and must suffer everyone telling him that they knew he was dead the whole time in The Sixth Sense. The infamous Julia Roberts gag marked the breaking point for many, but in a film that mocks the very idea of making such films solely to parade around A-listers, why not just call the actress by her real name? That is what everyone who watches the movie will do anyway.

Soderbergh has a ball, using takes of actors corpsing, a different font for every single (and ludicrously specific) on-screen title announcing place and time, random freeze frames and an outright fuck-you ending that rewrites the entire film just because it can. But the film never comes off as smug for all its trickery and satisfied star-gazing. Rather than namecheck tropes and references, Soderbergh and company work overtime to actually draw in the viewer before dismantling everything, actually embodying the travesty rather than haughtily standing outside it. Besides, anyone who thinks that Soderbergh does not take his act of tomfoolery seriously should listen closely to David Holmes’ phenomenal score. Augmenting the jazzy, caper vibe of his Ocean’s Eleven score with funky guitars and distinctly European flavors, Holmes invites the viewer to sit back and bask with the all-stars instead of just gawking at them. Like Soderbergh himself, Holmes never plays the notes you expect him to, and his work on the film represents both its most straightforward pleasure and its most refined, subtle gag.