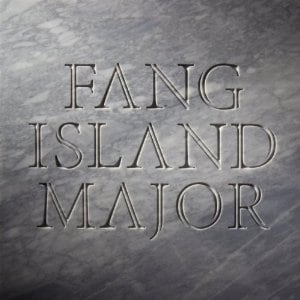 [xrr rating=4.25/5]In 2007, a group of lucky kindergarteners learned their letters, but this day the G’s, D’s and A’s spelled out power chords instead of flashcard words. Which is not to say that the performance by Fang Island was absent of a teachable moment: “Who thinks they can spell ‘fang’ in this classroom?” the teacher asked. “F-A-N-G!” fired off one little kid, all self-certain and precocious. Moments later as the band catapulted into the ecstatically chipper instrumental “Chompers,” the room exploded into fits of jumping, hugging, jumping while hugging and all manners of giddy celebration, the energy output equivalent to the spontaneous metabolizing of a thousand Pixy Stix. How these guys were able to keep it together without collapsing into fits of laughter or ridiculously joyful tears is beyond me. So here we are five years later: “Chompers” is back for a curtain call on Fang Island’s second full-length, Major, and presumably, somewhere in a Rhode Island elementary school, there are a bunch of now 10 year olds riffing wildly in tribute with their air guitars.

This is the process, the goal and the magic of Fang Island, this quasi-spiritual transfusion of unfiltered affirmation. We’ve seen that this is possible in the pee-wee demographic, and through a kaleidoscope of fuck-yeah riffs, game cartridge keyboards and compositional builds that gallop up on you before they scoop you up and blast into the stratosphere (and yes, I do mean that it’s like a racehorse/space shuttle hybrid transformer type of thing, that’s actually exactly what I mean), Major will make you happy. I swear it. You are a cartoon firecracker. You are the downhill thrill of a dirt bike. And you are those thousand Pixy Stix.

Whereas their self-titled debut was primarily instrumental – save for the interjections of cryptic koan-like messages and hooted prayers – Major finds Fang Island achieving lift through lyrical means. And while that might’ve translated to a slant towards the conventional (and also commercial), there’s no reason to be sorry that Jason Bartell takes the mic more often here. “Sisterly” adds the verse-chorus-verse component while still preserving the exuberance of composition Fang Island rocks so well: a deliberate scoot between 6/4 and 4/4 time signatures, punchy spurts of wicka-wicka effects, handclaps (oh trust me, you’ll clap too) and, best thing of all best things, the last act crescendo where melodies, countermelodies and victory lap riffs foam up and flood the room. Is there an Anamanaguchi remix of this song? The answer can only be yes.

Though Fang Island is all about guitars, guitars and then add a bunch more guitars, the twinkle of carbonated keys introduces “Victorianian” above a piano figure that sounds like a purist mediation on the major block chord. Opener “Kindergarten” is prefaced similarly, with rhythmic plinking that sounds like the internal mechanizations of a cuckoo clock. “Dooney Rock” hails from Kentucky by way of Brooklyn; in a rootin’ tootin’ amped up hoedown, Marc St. Sauveur’s bass kicks substitute for the boot stomps of the square dance caller while Bartell and Chris Georges stand in for the mad fiddlers, their speedy deedle-dee-deeing inspiring a rush of crowd surfing at this barn dance.

Shit, I don’t even know how to tell you about “Asunder.” When is the last time a song left you feeling levitated, magnetized, 10 feet taller and 100 times as strong? A simple guitar lick races along and then keyboards swim up and burble in symbiosis. A snare beat activates the accelerant. Then, everything doubles up and gets super mega: Bartell’s vocals swell out in two part harmony as do the guitars. Sleigh bells! Cresting, cresting and more cresting. There are not one but two bottom-up builds in “Asunder,” and the superheroic melodic surge in its final minute beams with such victorious power that for a few seconds I am overcome by it, my sense of its perfection kind of catches me by surprise but fuck it, I’m going with it. This music is right with me; it is total. And yeah, “major.” It makes my hair bright, it dilates my pupils. I say all of this – please believe me – in utter, unironic seriousness.