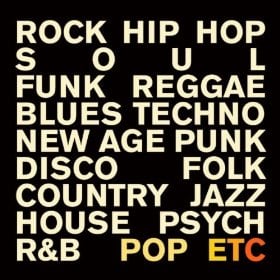 [xrr rating=2.0/5]San Francisco indie outfit The Morning Benders recorded two very excellent records, the low-fi, folky Talking Through Tin Cans and the bigger, more psychedelic Big Echo. The band found out that their name has derogatory homophobic connotations in parts of the U.K. and didn’t want the meaning of “Morning Benders” to be misconstrued. The group, now consisting of bandleader Chris Chu, his brother Jon Chu and Julian Harmon, has transformed itself into POP ETC. It would be wonderful to report that the change is basically in name only, that the band has continued their streak of creative, authentic indie-pop. Instead, the outfit’s self-titled “debut” has fundamentally nothing in common with those earlier releases. POP ETC is an unabashed attempt to pander to all that is superficial and trite in contemporary, radio-friendly pop music. It’s a rather dismal, exasperating record to listen to.

It’s telling that Chu chose hit-making producer Andrew Dawson to collaborate on this effort. Most of the tracks are dominated by auto-tuned vocals and electronic beats. This is not a bad thing in and of itself. The problem is that these techniques are used in the service of songs that often sound like parodies of mainstream pop music. It seems that Chu and company are dead serious, though. Relentlessly sincere, heart-on-sleeve lines such as “If I could give it all back for just one more day with you” and “One day it’s love/ And one day’s it hate/ We can’t communicate” stand alongside such awful Top 40 clichés as “I just want to live it up/ Want to live it up” and “Rock your body quick/ And get up, get up.” The band is also concerned with being overly politically correct, perhaps because of the bad connotations of their former name. So, on “Live It Up,” we get the line, “I don’t mean no disrespect/ Never called a girl a ho.” That’s nice enough, but it seems completely out of place on a pop song about partying and, apparently, jumping into bed with a groupie on the road while the speaker’s “main chick” waits at home.

The ridiculously banal lyrics are only one problem. Given that the record relies so much upon catchy melodies and beats to keep the listener engaged, it’s amazing that basically none of the hooks really stick. The melodies lack distinctiveness and the beats sound like they were generated by a free iPhone app. Parts of POP ETC are memorable in the worst way possible. You’ll want to erase that annoyingly cheesy synth doubling the lead vocal on “New Life” and the chirpy alien noises on “Live It Up” from your head forever. Unfortunately, their awfulness may haunt your hard-earned sleep for several nights.

POP ETC contains at least one success. “Keep It For Your Own” is by far the best song on the record. Perhaps not coincidently, it was produced by Danger Mouse. The tune is slightly reminiscent of Broken Bells, the collaborative project of Danger Mouse and Shins front man James Mercer. It features a tuneful synth bass line, which serves as the track’s main hook. Several melodies are layered on top of each other, and the song is more compositionally complex than any other. It sounds like, you know, a song that an actual artist put a lot of time and thought into creating, not just a fake, thrown-together pseudo-pop construction. This one decent tune does not make the album worth your time, though. Don’t get me wrong, it’s very possible to produce a synth-heavy, hook-centric indie-pop record with heartfelt emotion and creative integrity. Have you heard that new Passion Pit album?