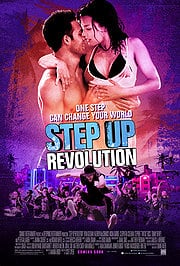 [xrr rating=4.0/5]For those mourning the death of the movie musical, the dance film might be our only hope for the resurrection of its ecstatic pleasures. Critics dismiss these films because of their unfamiliarity with, indifference to or disdain for dance in general, but also because, in focusing on what these films fail to do, they ensure their blindness to the genre’s actual successes. Functional acting and thin plots loosely tying together dance sequences are not flaws but rather the negative image of what films like those in the Step Up series set out to accomplish. The first Step Up was more romance than dance film, and it was only when director Jon Chu took over for the second and third in the series that dance became crucially central. Chu and his collaborators created dazzling pop-art spectacles exhibiting a breathtaking mastery of movement, staging and rhythm. These films inverted Step Up’s formula, hanging virtuoso dance sequences on modest narratives likable enough to give narrative heft to the dancing. With Step Up Revolution, the series has reached new heights in balancing dance and narrative, the latter giving shape to and amplifying the former, and the result is one of the year’s biggest cinematic surprises.

Step Up Revolution might fluster viewers more accustomed to lightweight fare from the genre with its overtly political, anti-corporatist plot centering Romeo & Juliet-style around Sean (Ryan Guzman), a hotel worker and leader of dance crew the MOB, and Emily (Kathryn McCormick), the dancer daughter of a wealthy land developer (Peter Gallagher). Emily’s father owns the hotel that employs Sean and sets the film’s central conflict in motion when he decides to purchase and develop a tract of shorefront land, a project that would displace the neighborhood’s working class community, including the MOB. If this sounds like “Occupy Step Up,” that’s not far from the truth. At this point, the issues raised by the Occupy movements have entered the mainstream of our political debates, so rather than shoehorning them into a dance film, Step Up Revolution merely takes the national pulse and responds sympathetically.

To its well-deserved credit, Step Up Revolution never fumbles its political theme. In the film’s centerpiece, the MOB stage a flashmob dance at the office where the development deal that would put countless people out of their homes is being discussed. A well-timed fire alarm sets the stage for a stunningly choreographed dance in the building’s lobby: the MOB, dressed in business suits and carrying briefcases, perform their dance amidst dollar bills falling from the sky. Their strict regimentation, in contrast to the looseness of most dances in the Step Up series, emphasizes one of the film’s implicit themes: corporate culture opposes the free form of personal expression represented by dance, where each individual’s uniquely shaped and endowed body functions as a rebuke to corporate capitalism’s mass produced standardization. Step Up Revolution doesn’t signal these themes: it actively expresses them, embodying the values at stake and demonstrating how individuals always spill out over the homogenizing strictures imposed on them (e.g. the plain business suit). Step Up stalwart Adam Sevani makes a cameo appearance during the film’s finale, dancing wildly and bouncing off a phalanx of dancers dressed in crowd control gear and carrying riot shields. Dance dramatizes the plight of the individual against organized oppression, a sight unmistakably reminiscent of the Occupy protests. This is dance at its most cinematic, using the tools of the medium to create unique meanings incapable of being expressed otherwise.

Although Step Up Revolution begins as a lusty bacchanalia, it quickly proceeds to show that its forms of dance, styles tied more to the street than formal institutions, are as deserving as any of being considered “high art,” all in stunningly impressive fashion. This is explicitly argued in a bravura dance staged in a museum, which begins with dancers disguised as works of art suddenly emerging from their invisibility when the dance starts. The MOB, controlling the museum’s lighting and sound, proceeds to stage a ballet in almost total darkness, illuminated by only a few sources of light, which the film’s 3D renders wondrously tactile. The entire setup taps into cinema’s fundamental relationship with light—”painting with light,” as legendary cinematographer John Alton called it—and one shot in particular, in which Sean and Emily stand together in a perfectly symmetrical composition illuminated only by an almost abstract beam of light, recalls that master of light and the musical, Vincente Minnelli. It’s no stretch to say that Step Up Revolution is the series’ most ambitious film, capably rising to the challenge.

The film’s political program, in which a dance crew fight against a villainous corporation to keep their homes, is very much of our time, not least because of its engagement with viral images—the crew participates in a competition for YouTube hits and uses their videos and the spectacle of their outlandish dance flash mobs to draw attention to their political cause. The crew’s ultimate achievement might seem dubiously unrealistic, and perhaps it is somewhat, in the end, despite the satisfaction we derive from it. But its thinking about how to achieve political ends in our media-saturated world is rather sophisticated, as the internet demonstrates every day when it drives our collective attention from one cause to another. This is the politics of spectacle: there is a lot of injustice in the world, but if you get enough eyes on something, you might begin to change it. The film’s final dance, an unabashedly, almost classically romantic duo between Sean and Emily, uses the same principle for more personal aims: its tenderness and undeniably beauty sufficiently moves Emily’s father, convincing him of the purity of their love in grand melodramatic fashion. It neatly summarizes the previous 90 minutes: dance can move us, make us think and even change how we see the world. Step Up Revolution tells us and simultaneously shows us that this is so.