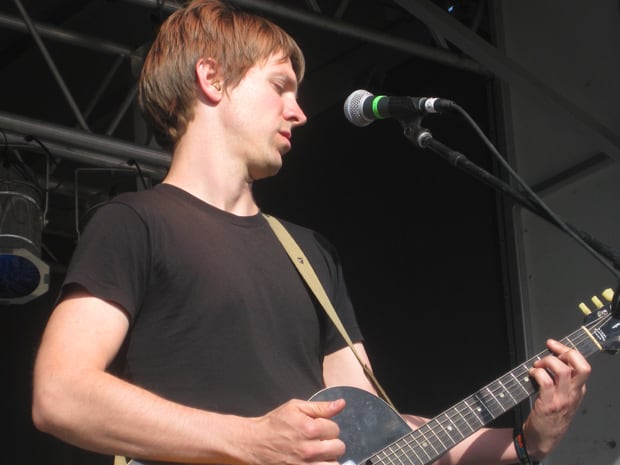 Amid a stretch of balmy but mild mid-July evenings, Shearwater graced Portland’s intimate Mississippi Studios with their brand of literate, brooding rock swagger. Following a set from openers Husky of Australia that didn’t quite adhere, their careful arrangements never managing to find purchase with the audience except toward the very end, the Austin-based headliners’ moodier, rawer compositions were much more eagerly digested. In an exhaustive but straightforward lineup of songs, the performance was nearly as no-nonsense as their 2012 record, Animal Joy, from which the bulk of the evening, along with a few covers and previous release highlights, was drawn.

Overall, the band opted for harder hitting, louder material over the softer piano and folk pieces prolific in their earlier discography. Drawing from the deep, dark back half of 2008’s Rook for the first track of the evening, somber slow builder “The Snow Leopard” immediately pressed heavy on the limits of the venue’s sound system in its full-figured execution. With guitarist-vocalist Jonathan Meiburg’s intensive gaze leveled somewhere beyond the back row of the audience, wild eyed implorations to “come away from the shadows” were immersed in plodding, angular hacks of guitar, spacious percussive blows and bass fuzz. Similarly, Meiburg hit early vocal highs in the much-anticipated “Animal Life” – the crowd exploding into applause at the grimy opening notes and moody falsetto. Though the rest of the instrumentation sounded largely washed out, drummer Danny Reisch’s explosive percussion kept the track’s muscular legs flexed, tight but open-ended in the song’s later percussive gallop.

By Golden Archipelago’s contagious “Castaways,” whatever minor sound issues Shearwater may have been experiencing were sorted. Its heart-stopping silences and rousing chorus were delivered with an even nervier tension and sense of tight-lipped control than the makeshift island sway of the album version. Shearwater took their time warming up their next effort, the recent “Dread Sovereign,” using a foreboding intro, skuzzy riff and inflections of metal to draw out its swagger, making the song unfold languid and unseemly as the terms of a vile proposal might. But it wasn’t until the racing, dancefloor-rapid rhythm of “You As You Were” that the crowd began to pick up on what Shearwater was bringing to the table that night. Murmuringly appreciative prior, immediately after that track’s glorious apexes and conclusion the crowd was shot through with a palpable electricity. Capitalizing on that, “Insolence” was wheeled out so Meiburg could howl, “Betrayal!” into his mic about a million times, its hammer blows of guitar landing home in dissonance and power so fierce even two middle-aged exurban types nearby were nodding appreciably.

Also nailed were the marathon “Immaculate” as well as “Pushing the River” and its centerpiece bass riff. Following that, the wild enthusiasm for “Open Your Houses (Basilisk)” did its best to both make up for the smaller crowd and do justice to the magnitude of the performances. A nearly indistinguishable take on the rhythm slipped beneath sexed-up keys provided the spin both the song and audience desired.

“Run the Banner Down” (“about a snowstorm,” Meiburg says) was loaned a placid fullness, unpacking sensitively in fractured percussion, to which the whip-snap rhythms and handclaps of “Breaking the Yearlings” provided a manic, twitching counterpoint. And though Animal Joy closer “Star of the Age” would seem a natural choice to end the set with under normal circumstances, after a full litany of heavy hitters its striking earnestness came off as played up, inflated and more than slightly unnecessary.

Meiburg returned for a few solo encore outings and some with the rest of the band (the sprinting “Landscape at Speed,” Palo Santo cuts “Hail, Mary” and “White Waves,” a cover of Scott Walker’s “Duchess”), tacking on noisy, extended outros to nearly every one. Despite thinner numbers, the Thursday night crowd had no lack of enthusiasm for the Austin-based outfit, whose star has risen alongside increasingly mature, soaring arrangements splashed across their records’ gloomily expressive ballads, slow-grinding suites and outright rockers. In a summer jam-packed with great shows, an intimate Shearwater set with only 100 or so of your peers – however light on frills or packed with punchiness – is something pretty special.