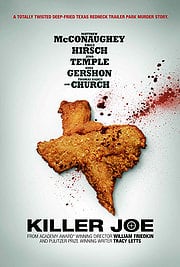 [xrr rating=3.5/5]Sordid and sweaty, William Friedkin’s Killer Joe earns its NC-17 rating, not just through profuse violence but the swelteringly nasty environment it cultivates. Set in a blistering Texas trailer park, the film concerns a set of dunderheaded yokels who go about setting up a murder plot for insurance money, the kind of thing that is obligated to go horribly wrong. Opening with shots of lightning lighting up the horizon, Friedkin goes into full exploitation mode for this hothouse Texas noir, anchored by a slithering performance from Matthew McConaughey, which fully unleashes the actor’s inner sleazeball.

A Dallas police detective who moonlights as a contract killer, Joe Cooper is a force of chaos but also one of equitable reckoning, assuring the other characters get exactly what they deserve. Clad entirely in black, his mere presence capable of silencing barking dogs, he may very well be the devil himself. He provides a straight line of precise order amid a meandering field of idiots, which include Emile Hirsch as dirtbag dealer Chris, and Thomas Haden Church as his father Ansel, who seems totally ambivalent about having his ex-wife killed. But despite his diligence Joe isn’t infallible, falling in with Chris’s younger sister Dottie, who he takes on as retainer after the family is unable to pay him up front.

There’s some element of remote relatability to these people, which is mostly centered on Chris, in debt with a local heavy, who promises to bury him alive if he doesn’t pay. But these characters are such obviously gross stereotypes that the film is at its best when it’s focusing on outright sleaze. The sibling relationship between Chris and Dottie is the focal point of his storyline, and his rampant desire to protect her remains the film’s sketchiest element, coasting on pre-conceived notions of brotherly protectiveness. This isn’t totally believable within this world, where the bonds of family have broken down entirely, but it gets turned on its head nicely in the film’s surprising conclusion, which hands over most of the control to Dottie without sacrificing any of the tone it’s established so far.

Growing more and more sodden as it progresses, Killer Joe circumvents its apparent derision for these characters by blowing out into full-on gonzo grossness. As is usually the case in Friedkin’s movies, vice is a consuming force, a Pandora’s box that enraptures and eventually swallows his flawed main characters. The main problem here is Chris lacks the obsessive objective-minded personality of Popeye Doyle or Richard Chance; he’s not really seeking anything specific, which makes a late decision to flee to Peru feel all the more jarring. This is partially amended by the fact that the film’s real protagonist here turns out to be Joe, with McConaughey stealing every scene he’s in, as Friedkin revels in the corrosion he visits upon this already broken family unit.

All this culminates in a stagebound setpiece that feels like the clearest connection to the play the movie is based on. There’s the sense that Letts, who also wrote Bug, is encouraging Friedkin’s nastiest tendencies – a welcome change from the softening that often accompanies a director’s slide into senescence. No punches are pulled, and each borderline offensive action is corrected by pushing the offensiveness even further, like a KFC drumstick fellatio scene that will likely prohibit McConaughey from returning to romantic comedies once and for all. Killer Joe may not be much on its own, but it functions as both another nasty coup for a scattered director and a coming out party for McConaughey, who proves just how far he’s willing to go, and how believable he is in going there.