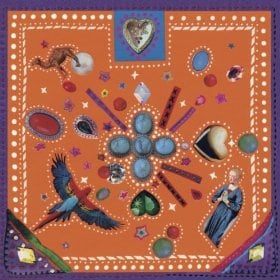 [xrr rating=3.0/5]I blame Enon for my love of big, heavily compressed drums and square synths. I’ve nurtured that love for more than a decade now, and while plenty of others have come along to encourage it, Enon was the first and will likely remain close to my heart forever after as a result. Which made it especially disappointing when the band came to a sputtering end last year after nearly half a decade of silence following their final album Grass Geysers…Carbon Clouds. Still, it’s not like the individual members haven’t kept busy, especially Toko Yasuda, who contributed to Les Savy Fav’s Let’s Be Friends and has been playing keyboards for St. Vincent all while working on her solo debut Parthenon, under the moniker PLVS VLTRA.

Parthenon offers plenty of buzzy Moog and crunchy drums, but they’re less prominent here than on the bulk of Enon’s recordings. Instead, Yasuda keeps them on the fringes, shifting the focus to her ethereal voice and layers upon layers of glitchy elements and samples. The end result is closer to a 21st century Cibo Matto more often than not, with the exception of opening track “Flowers To Bees,” which sounds like a Hocus Pocus-era Enon single, and “Yume,” which sounds Yasuda imagining a future collaboration with MF Doom. And then there’s the title track, which I like to imagine is a glimpse at what could have been had Yasuda taken it upon herself to rejuvenate Ace of Base’s career.

The Cibo Matto comparison is particularly apt, though, as Parthenon is a decidedly uneven affair, often getting by on the strength of novelty and the inherent allure of Yasuda’s voice and pop sensibilities. Like that dormant ’90s duo, Yasuda as PLVS VLTRA heavily favors a kitchen sink approach to her sonics. That’s not to discount the production sensibilities of Yasuda’s former bandmate John Schmersal, who fills out the chaos with a wicked low end and plenty of room for all the disparate ingredients to breathe. Much of Enon’s success came from the way Yasuda and Schmersal were able to combine their sensibilities and that remains intriguing here, even if nothing on the album quite lives up to either artist’s pedigree.

Yasuda’s debut suffers the most towards its back half, where many of the tracks feel especially dated, like “Sunkissed” and its unfortunate similarities to Luscious Jackson, or worse, just pointless, as is the case with the drifting, lackadaisical “Birthday Party.” Parthenon isn’t the strongest debut, but then again, neither was Enon’s Long Play. So here’s hoping that PLVS VLTRA’s sophomore effort will be someone else’s Believo!, instilling some other, weirder musical fetish.