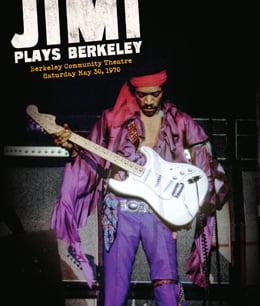 For many of us born after 1970, it’s easy to forget that rock guitarist Jimi Hendrix was, at one point, an actual person. With so many memorable images that have graced landmark album arts, colorful T-shirts and unforgettable posters that covered college dorms and Sam Goody locations alike, the mythology surrounding Hendrix has made him more icon than man. On one hand, this has allowed his legacy (long kept under the watchful eye of his estate) to retain focus on the actual music itself, forcing new listeners to spend some time with his body of work in order to truly experience Hendrix. Yet, his ascension into the absolute top tier of 20th century musicians has made grasping an idea of who Hendrix really was seem almost unobtainable. Fortunately for us, Sony’s Legacy Recordings has exclusively licensed the highly coveted concert documentary that captures the man at the height of his powers: Jimi Plays Berkeley.

In 1969, Hendrix packed the Oakland Coliseum. Between his legendary Monterey Pop and Woodstock performances, he had already become a superstar and was one of the most must-see attractions in rock. One year later, he opted to do a pair of shows at the much more intimate Berkeley Community Theater. While musically the show was the perfect performance space for Hendrix to rip through his standards with the absolute technical mastery a virtuoso at the top of his game could do, the location was also indicative of what Hendrix’s music meant to many. Along with volatile student activism surrounding the Vietnam War, the always controversial Berkeley student body was going through a tumultuous time of conflict with authority and radical politics. There was much unrest, and Hendrix’s music involuntarily scored it. When over 1,000 fans were turned away, violence erupted.

While many celebrate Scorsese’s The Last Waltz concert documentary for capturing the artists by not showing much of the audience at all, Jimi Plays Berkeley sets the atmosphere perfectly by unflinchingly showing what was happening in Berkeley at the time. By juxtaposing the street conflicts between neighborhood residents with Hendrix arriving at the venue, not only do we get to see Jimi in the flesh, but we get to see the full ground zero of one of history’s most mythologized concerts. The film is a great primer of both Hendrix and 70’s Berkeley alike.

I was pretty surprised with how incredible this latest transfer is. While at first glance it’s clearly a 16mm concert film, the pristine detail in the images is startling. Even the most devoted to their bootleg of Jimi Plays Berkeley will double take once they see how each and every face in the concert hall can be made out. Along with the picture and sound being unprecedentedly impeccable, there’s now more to be seen than ever. There’s more songs, more Hendrix and even more Berkeley footage, giving the whole affair a satisfying completion.

This edition of Jimi Plays Berkeley is not only the definitive edit of the film, but should be the one-stop source for future generation to understand exactly what made Hendrix so special. From the transfer, to the performance, to the story, it’s an icon’s amazing legacy captured in 72 minutes. While the Blu-Ray also includes commentary from the audio engineer and (for diehard fans) the complete surround-sound remastered audio from Hendrix’s second set, it’s merely more icing for the extravagant cake that is this testament to a rock legend. Until the eventual day we get the Jimi Hendrix hologram, this release of Jimi Plays Berkeley is closest you’ll come to seeing him live once again.