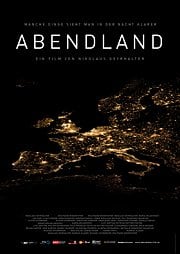 [xrr rating=3.75/5]Abendland, the title of Nikolaus Geyrhalter’s new documentary, is a German word that is commonly used to represent “the Western world,” but the more literal translation is “evening land.” The double meaning is the launching point for the film as Geyrhalter patiently, methodically trains his camera on images of Europe operating in the depths of night. Shot over the course of two years in Slovakia, Italy, Austria, Belgium, Germany, the UK, the Netherlands, the Czech Republic, Switzerland and Spain, the film moves without fuss or even any discernible chronology across several different unremarkable scenes, seemingly united by little more than the darkness outside. The director seems intent on capturing a continent with its guard down and, in doing so, perhaps gleaning some greater truths about its deceptively quiet soul.

Geyrhalter offers no narration, no onscreen chryons, no explanatory commentary from its subjects to guide the viewer. It is simply a progression of people going about whatever activity occupies them on the evening the camera found them: taking calls at a suicide prevention hotline, attending a concert, sorting packages on a line or, in one attention-getting sequence, spending a little quality time at an erotic club in Prague. The segments don’t flow into one another in a sequential way and the locales don’t recur. It is a series of moving snapshots, assembled with an apparent laissez-faire attitude that resembles randomness as much as anything else.

Indeed, the film is inscrutable enough – holding back any obvious statement of its thesis – that it’s tempting to try to ascribe greater meaning to specific shots that automatically carry greater weight simply by their placement: taking the first shot and trying to tie it to the last in order to better read the spines of that which it bookends. That opening shot is a surveillance camera craning to view the panorama of a wide, open field, an observer in the truck below seemingly adding import by noting, “The visibility is good today. But there is no one out there.” And there are some additional moments when the thoroughness of Europe’s growing surveillance culture elbows its way in.

Yet that glimpse of Orwell’s Oceania taking root seems to be a natural, necessary flavor of the piece rather than its reason for being. Instead, the element of the film I found most fascinating is woven through more surreptitiously. Geyrhalter seems to present the late night as a time when individuals are doing the unglamorous work that most want no part of, not even to know its taking place: a caretaker goes room to room providing assistance to elderly invalids and two men methodically see to the task of feeding wooden coffins into the oven at a crematorium. Even the enormous mass of revelers at an Oktoberfest celebration quickly need to cede the screen to a waitress loaded down with plates of meat who requires a security detail to guide her through the oblivious, intoxicated sea of people. Whether the theory is that nighttime should be for play or slumber, Geyrhalter demonstrates that there’s a significant population that views it, perhaps not by choice, as time to work, all the way through to the erotic club where a woman is charged with waving a “Call Me, I Speak English” sign at a camera.

A film like Abendland almost automatically takes on a mesmerizing quality at times, but Geyrhalter largely avoids this pitfall, in part because of the striking vividness of the cinematography (a duty Geyrhalter also handles). More than that, it’s because the director is so incisive in his choices. His film may bear some of the characteristics of a patchwork, but there’s clearly a plan there, even if it’s difficult to deduce. In those evening images, he’s finding his way to a compelling portrait of a society.