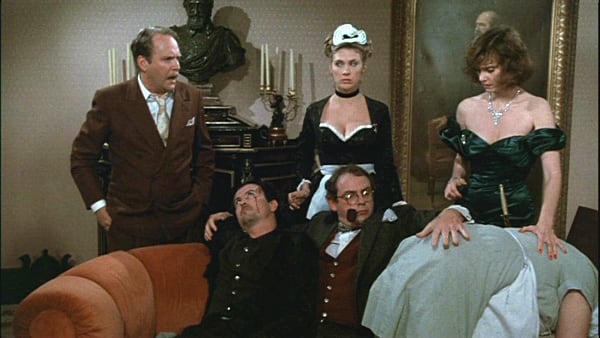 As a society, we’ve made some mistakes. I think we can all admit that war, eating monkey brains and institutionalized racism were not good ideas and should not have been followed through on. Continuing that list, the film version of Battleship was also a serious mistake. Nothing about a simplistic board game that involves an X/Y graph and plastic pegs is cinematic. It never should have been made, Liam Neeson’s involvement notwithstanding. Although the current trend of adapting plotless board games into films, seemingly for the sole sake of name brand recognition, is one of the most truly abhorrent things to happen to cinema in perhaps the entire history of the medium, it’s not without precedent. Amazingly, that precedent was actually hilarious. And even more amazingly (and unlike Battleship), it was intended to be.

That film is Clue. Based on the Parker Brothers (now Hasbro) game of the same title, it was released in 1985 to generally poor reviews and flopped at the box office, failing to even recoup its budget. In theory, it’s not difficult to see why: the adaptation of a board game was a new and weird notion back in the day of high concept comedies (for context, Back to the Future and Cocoon were both hits in 1985), and the idea of a wacky murder mystery has not historically thrilled movie-going audiences. But in practice, it’s a damn shame that Clue has largely been the province of cult audiences. It stars an ensemble of incredibly talented comedians, a dense, winking plot (particularly for a comedy) and a sense of playfulness so at odds with its subject matter that it practically created a new, unique genre: the crass comedy of manners.

The plot itself can be summed up as easily as the game itself: a group of strangers are invited to a mysterious dinner party, their host is murdered and they have to try to figure who did it, where and with what weapon. But Clue takes that simple premise and runs far afield with it, adding Cold War politics, World War II prostitution rings, J. Edgar Hoover’s sexuality and a little light necrophilia. That’s not even mentioning the sexy French maid (Colleen Camp) or Martin Mull’s mustache. 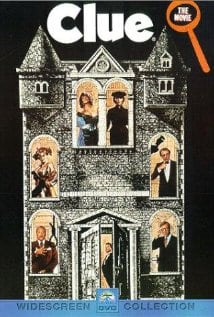 All of that could seem in bad taste, but the incredible cast of the movie makes it work. The guests are identified only by colors (as per the game), which are explained as pseudonyms to protect them from the blackmail scheme they’re all trapped in. Mull is Colonel Mustard, perfectly cast as a blustery buffoon of a military man with a dark secret. Madeline Kahn adds her alternately deadpan and shrill charm to Mrs. White, a black-clad widow with a dark secret. There are also fine performances by Michael McKean as the closeted State Department official Mr. Green, Christopher Lloyd as the lascivious Professor Plum and Eileen Brennan as the hypocritical, chattery Mrs. Peacock. Dark secrets abound, but they’re all played for cynical laughs and a quirky sense of historical revisionism. But the film’s secret weapon is Tim Curry as the butler Wadsworth. Suffice it to say that his pokerfaced explanation of the duties of a butler (“I buttle, sir”) is one of the greatest comedic deliveries I’ve ever seen in a film. He alternates between unhinged ferocity, underplayed humor and manic physical comedy so quickly that it’s amazing that his performance in the film has been so ignored.

And Clue takes as much inspiration from the screwball comedies of old as it does from its titular board game. The dialogue is breakneck, with multiple combinations of its able cast switching off as straight man and comedian, often interrupting each other for quick one-liners and off-the-cuff references to 1950s politics. And much like traditional screwball comedies, it’s not afraid to use innuendo to get a little trashy. Let’s just put it this way: there is probably no other film in history that has the same ratio of United Nations jabs to dick jokes as Clue.

The single most unique idea behind the movie was almost certainly itself a downfall as a theatrical release. Clue was filmed with three alternate endings, all of which have different identities for the killer. During its initial run in theaters, most cinemas showed one of the three, which meant that filmgoers could end up seeing different movies when comparing notes or reviews. It also meant that in order to see the entire movie, you’d have to pay to see it three times. As you might guess, it seems audiences gave it a quick “fuck that” and moved on to Spies Like Us. But while the multiple endings ultimately crippled the film financially, it’s a brilliant conceit. After all, every game of Clue has a different outcome based on what cards are chosen. Why shouldn’t the film? While home releases generally give all three endings in sequence, it’s a remarkably clever take on the idea of a board game adaptation. Combined with the brilliance of its cast and the sheer volume and pace of the jokes, it’s a sadly under-regarded movie that was ahead of its time. Just don’t let that convince you to watch Battleship 2: The Battling when Clue is out there.