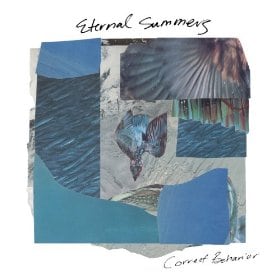 [xrr rating=3.75/5]Virginia indie-rock outfit Eternal Summers sounded like endearing novices on their debut a few years back, little to distract from the duo’s soundly realized earnestness. Correct Behavior finds the band honing in on a more unique, lasting sound and putting together a consistently more mature offering. Now recording as a trio, Eternal Summers also left behind some of the ’60s inspired garage sound they shared with Dum Dum Girls and a slew of other acts, instead embracing the dreamy sensibilities their ramshackle debut only hinted at. It’s a logical move that makes good use of a new bassist and is assisted by guitarist Nicole Yun’s more engaging instrumentals and notably more confident vocals, along with production from the same NY team that put together Dum Dum Girls’ last disc.

While recording Correct Behavior, Yun decided to embrace what she describes as “grand rock anthem chords and riffs.” It’s certainly not a booming album full of cheesy rock showmanship, but the first couple tracks hit hard and fast, galloping along in a way that makes this sophomore release sound like Eternal Summers is having a great time recording songs that are bigger than those on their debut and strike with more authority. At times these tracks lack some of the spontaneity of Eternal Summers’ lower-fi, duo-composed debut, but the better moments here make up for it with a general sense of completeness Silver never quite managed.

The first few tracks are all punky, active rockers, kicking things off with the hypnotically careening “Millions” and crunchy power-pop blitzkrieg “Wonder” (that caps off a few of those heavy chords). “You Kill” is Eternal Summers at their most fun, Daniel Cundiff’s boisterous drum beat propelling the song with enchanting vigor. It’s the most immediate and lovable of these early rockers, not aiming for any high-level messaging but the best example of posh power-pop, slow pulses of ripsaw guitar grinding below a simple melody and lots of sugar-sweet vocals.

“You Kill” is also one of the album’s earliest indicators that Eternal Summers have finally found ways to truly combine their two distinct stylistic touchstones; it’s a driving rock song at heart but somewhat spacious and hazy floating above that punky drum beat and charges of amped-up guitar. Right from the start, Yun’s vocal sensibilities hinted at a penchant for dream-pop stylings; Correct Behavior is so successful because it marries those to all that garage girl-group flavor, creating a unique sound that improves on both. “Heaven and Hell” features guitars that grind and fuzz out, the sonics taking on an amorphous, cloudy quality around Cundiff’s high-hat rhythm. “Girls in the City” — featuring Cundiff’s sing-speak monotone ramble in a dry, ’80s post-punk nod — clamors along but relies heavily on spiky, laser-beam guitars. “It’s Easy” drives along at a mid-tempo pace, and the instrumentation doesn’t ever approach Beach House levels of delicacy, but Yun dials back the vocal punches and glides along over a more deliberate, static rock structure. The song creates a light melodic centerpiece to an album full of frantic pacing and it’s a welcome pause before rushing on ahead.

By the time Correct Behavior wraps up it feels a bit front-loaded and overlong, those single-worthy openers as engaging as any Eternal Summers have yet to produce while late-album tracks “Heaven and Hell,” “Good as You” and “Disappear” blend together due to a stronger emphasis on the dreamier side of Eternal Summers’ sound. That’s not a knock on the album as a whole, or even those individual tracks, just a peculiar pacing choice that might lose some listeners. But it’s an intentional decision (closer “Summerset” fades out into nothingness over a machine-style beat) that reinforces how much more deliberate this albums feels than Silver and how much more complete and realized Eternal Summers’ sound is proving to be. Yun and Cundiff still record as part of the Roanoke art collective Magic Twig, and that incubator of artistic curiosity and experimentation will surely keep pushing Eternal Summers down this path.