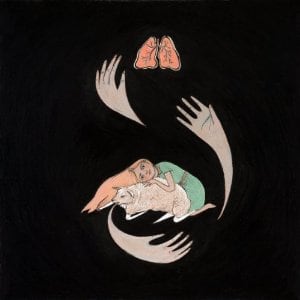 [xrr rating=4.0/5]The far-reaching consequences of our instantaneous culture have had at least one unintended effect in music: new acts spend far less time gestating and more time releasing music. Montreal (by way of Alberta) dark-poppers Purity Ring, still fewer than two years old as an outfit, fits snugly into this category. Having garnered attention for the playful ebullience of a single self-released track in January of last year – when they had only just formed a few months earlier, the group’s Corin Roddick and Megan James had no trouble flipping the cultural capital “Ungirthed” afforded them. Now with 4AD, they’ve leveraged a single, infectious song’s trickling synth, and bubbling vocals that surface and burst amid wobbly bass and skuzzy laser, into an impressive debut (“Ungirthed” appearing on it essentially identical to the demo version).

The deliberative synth wave, then handclaps and a peppering of drum machine, on opener “Crawlersout” sets the tone of Shrines from the start. At its inception, vocalist James intones, in a precocious warble, “Sea water is flowing from the middle of my thighs/ Wild buffalo are dancing on cliff tops in the skies.” Later, as the song settles into its house-inflected rhythms, in another bodily inversion common on Shrines, its offspring issuing “out of me like grandma’s vines” and how “they’ll cover the hills with their sweet flesh and soft nails.”

Lead single “Fineshrine” follows, eschewing the studied sententious stance of “Crawlersout” in favor of an even more tactile approach, jiggly intro tumbling directly into a steady bob and weave that James and Roddick use to run the rhythm to the edge – always pulling away at the last second. Textures ringing out overhead, “splitting threads of thunder over me,” James implores listeners to “get a little closer” (How close? “Cut open my sternum and pull my little ribs around you” close.)

On the tail of “Ungirthed” come the relentless “Amenamy” and “Grandloves.” The latter, whose duet vocal turns and ghastly backing moans lend the track a spacious, languid sensuousness, unpacks in simple snaps-and-rhythm accompaniment before culminating in choppy piano notes that spiral off into nothingness. And, heavily hip-hop inflected, shimmery synth stepper “Belispeak” holds down the record’s third quarter.

Claps and percussion splash off into the dark on “Saltkin,” taking off after James’ “truly boy beloved” while the track undergoes a steady series of builds. Before blooming into an overpowering club beat, again the record’s ubiquitous physicality and juxtapositions: “there’s a cult inside me,” James stutteringly affirms, and, reading like an instruction manual for the body formed entirely out of couplets, “Still my sweating lips/ Wield my starving hips.”

Neo-Gothic atmosphere seeps out in the chants and heavy beats of “Obedear,” the mash-up vaguely coming across like a glitch outfit playing in an old cathedral. And the patiently constructive synth of the pyramidal “Lofticries” rounds off all that came prior nicely. Its revolving lines of instrumentation come on the heels of yet more of Shrines’ unified aesthetic (and synaesthesia): “green, green thunder and the loud rain,” “our pumping earthly hearts,” “lofticries” left to “seep through your sockets and ears into your precious fractured skull.” But while “Lofticries” comes off sounding as solemn a send-off as the album could have managed, the simple “Shuck” gets that honor, flaring out in handclaps and James’ vocals, tinged with the barest echo.

Befitting its name, and with all its talk of cults, spires and the temples of the flesh, Shrines is a record of worship, measured out in careful doses suggesting a thoroughly constructed – yet deceptively loose-hanging – thematic arc. It claims most of the world for ritual – love and sex as rites, family as an altar returned to continuously – while never burying itself in those themes or moving so far afield in them as to obstruct the sickly-sweet pop unfolding on each track. Amid all this Shrines even maintains a futuristic character on both ends of the mix but has, in organic rhythms that pulse and breathe, that rare quality of warmth often missing in electronica. But as with the similar Visions, this year’s debut from dark-pop darling and 4AD labelmate Grimes, with whom Roddick and James’ former band Gobble Gobble (now Born Gold) supported recently on tour, the result is important more for what it points toward than what it is. Going by the strength of this initial outing, slapped together so rapidly in the course of a little over a year, it likely won’t be long before Purity Ring treats us to more – if our prayers be heard. (To paraphrase James – they’ve built a fine shrine in me.)