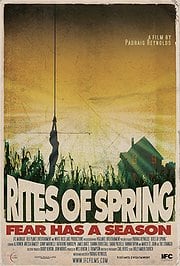 [xrr rating=1.0/5]A modicum of leniency is usually proffered when assessing low-budget films, especially when it comes to production values. What is of utmost value in a film is ultimately its vision; a director does not require an IMAX camera or high-end CGI to see it through. So it’s odd and inappropriate to read reviews of Rites of Spring that champion the low-budget film’s professional look and feel, because those aspects become naught when direction, and particularly writing, fall flat. I’m not seeking perfection here, but there are some basic tenets of narrative coherence and plausible character motive that I do expect in a film, given that Rites of Spring is a conventional horror flick and not some experimental essay on pagan monsters (paging Rob Zombie, because that could be awesome).

The film connects two storylines: the first involves two female friends drugged by a scary old man in a parking lot and tied up in a stable. He washes them, strips them, makes one wear a hollowed-out ram’s head and cuts them to collect blood for a springtime sacrifice, the recipient of which is a monster locked in a nearby cellar. Meanwhile, an ex-colleague of the two women, who was recently fired by their boss, decides his only option left in life is to kidnap the boss’s daughter with some sidekicks, one of whom is actually a murdering bad-ass who will provide some tenuous plot twists later in the film. As they negotiate a million-dollar deal for the safe return of the boss’s child in a conveniently abandoned building, the less hysterical of the two tied-up women manages to escape the stable and run away while the now-unlocked pagan monster (named Wormface) chases her through big scary corn fields and into the abandoned building, which is now also big and scary because it contains an axe-wielding pagan monster. As the kidnapping negotiations unravel among the crew, Wormface finds new prey for the springtime sacrifice and the film forgets that it’s also a semi-kidnapper-thriller film, switching to pure slasher formula as it trudges towards the finish line. Because character development is next to nil here—which short-circuits the ability of the viewer to identify with characters—the small degree of tension built at the end falls slack when the viewer realizes he or she doesn’t actually care if the Final Girl makes it.

In an early scene in which the Final Girl repeatedly ask/begs the old man “Why are you doing this?” as he cuts her friend with a rusty blade, I couldn’t help but want to ask director Padraig Reynolds the same question. The film begins with a barely-there premise about a spring solstice sacrifice, which is established simplistically through the old man’s mutterings about “harvest” and newspaper clippings about missing persons. There should be some kind of explanation behind the evil pagan ritual that unleashed Wormface, some kind of pathos or magic behind the ominous characters, but the film offers nothing more than monster chases and old-man croaks. Nothing could reveal the film’s total ignorance of paganism or horror films more so than this lack of back-story. Reynolds must be completely oblivious to the existence of films like The Cabin in the Woods, or even the sensible idea that a horror film should benefit from a little more than a checklist of ubiquitous horror conventions. If the characters were fleshed out rather than carved up by a derivative monster straight out of a Buffy episode (the kind that is written only to be made fun of by the Scooby gang, the kind that Buffy could literally kill with a Joss Whedon witticism), then perhaps Reynolds could have used genre conventions in a satisfying way, the kind expected from a low-budget horror film. But no, Rites of Spring just had to be more ambitious, professional-looking, self-serious and ultimately disappointing.