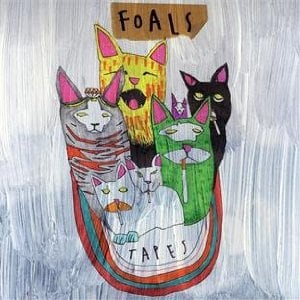 [xrr rating=2.5/5]With the fledgling Tapes series, the !K7 label has expanded upon their prolific DJ-Kicks releases by handing over mixing duties to guitar-oriented bands rather than lone wolf producers. While the concept of a mixtape is inherently intimate, conjuring nostalgic images of aficionados pouring over vast collections of tangible vinyl and cassettes and handpicking songs to craft an aural collage for a specific audience, the clubby tracks that populate Foals’ Tapes — in their contrast to anything Foals’ themselves play — create a barrier between listener and band rather than a greater closeness. There is little in the way of the math rock inflections that permeate the band’s own two albums; Tapes doesn’t contain a whiff of Foals’ rapid fire drums, hummingbird guitar and basslines cut with a straight razor.

After sitting through the first few clunky segues, it’s clear that Tapes is more of a novelty for the band, a way to have a little fun rather than create an actual artistic venture. While many of the vocal samples work well, such as the voiceover on opener Nicolas Jaar’s “Variations” that laments the loss of the word “cassette tape” from the Concise Oxford English Dictionary, too often vastly disparate tracks are shoved up against each other making transitions awkward and rushed. Other times, the song choices themselves are the greatest liability. Dorian Concept’s “Tropical Hands” is packed with obnoxious power-up electronic noises and little else. The subtle danceability of Caribou’s “Sun” in its original form works much better than the remix here, one with conspicuously added clapping percussion and other bells and whistles that make me wish I was listening to a Caribou album instead. And the buzzing sirens and throaty female vocal loops of “Give Me Love” (Cerrone) sound anachronistic on a mix that (thankfully) manages to keep most of the dance tracks modern.

But Tapes casts a few rays of light as well. Famed Afrobeat drummer Tony Allen’s “Kilode” is one of the tracks Foals’ got exactly right, as the manic hand drumming blends seamlessly with the electronic elements and backing vocals (and the whole track eventually gives way to funky bass) reinforcing the southern hemispheric influences present earlier in “Confusion (Ma Afrika)” (Condry Ziqubu). And the dreamlike quality of “Mushrooms (Marshall Jefferson vs. Noosa Heads), with its sleepy-voiced narrator recounting his first mind-bending experience with that particular psychedelic, may be the album’s highlight simply by drawing the listener into a bizarre experience.

Merely as background music while focusing on other things, Foals’ Tapes has value. And with an overabundance of remix albums out there, few are long remembered. Despite Foals keyboardist Edwin Congreave declaring that “It’s easy to throw some random music together and call it a DJ mix, but I wanted to make something more ambitious,” the compilation does indeed feel hodgepodge, even if great care was taken in the selection and placement of the songs. I’d like to see that ambition focused on making another Foals record; we’ve been waiting two years for a third one to drop. Tapes could have helped tide us over if it had offered more insight into the band’s direct influences or artistic approach. But after listening to Tapes, I feel like I know the band less than I did before.