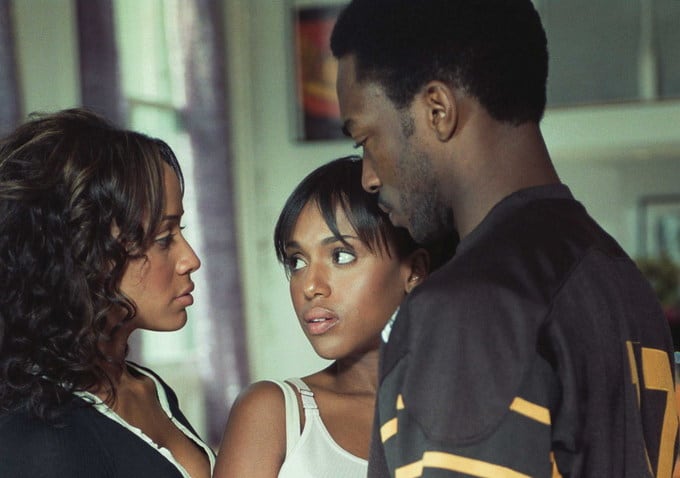 Jesus Fuck, what is She Hate Me even about? Spike Lee’s 2004 comedy/drama/satire is an inscrutable, confusing mess, but ultimately a valuable cinematic experience if you’re willing to follow the film wherever the hell it’s going and then try to figure out why it even bothered to go there.

She Hate Me follows John Henry Armstrong (Anthony Mackie), a symbolically named black man who works as an executive at a biotech company developing a cure for HIV until, amidst corruption and controversy, Armstrong becomes a whistleblower. His ethical actions result in him becoming a corporate scapegoat who finds his financial assets frozen, but then he resorts to having sex with his lesbian ex-fiancée (Kerry Washington) and her lover (Dania Ramirez) and a bunch of other lesbians (including a Lil’ Kim analogue and a mob boss’ daughter) for money until he has to testify in front of a Senate committee. Also, his dad has diabetes.

It’s easy to see what Spike Lee and co-writer Michael Genet are grasping at with She Hate Me. For one thing, the post-9/11 world is all over this movie, from the final opening credits shot of the George W. Bush three-dollar bill with the Enron stamp on it to the German scientist who kills himself by taking a dive from a tall building onto the top of a coffee cart, killing a Middle Eastern guy and a couple of faceless bystanders to the ensuing post-Enron corporate indictment. Ever a product of modern times, it becomes hard to extricate Armstrong’s alleged wrongdoing — and I do mean alleged, because he’s does nothing wrong, corporately speaking — from his sexual escapades. 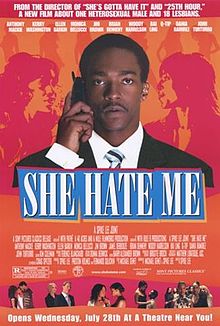 Even more notable is Lee and Genet’s exploration of black masculinity. It’s hard not to see the pair playing off of black stereotypes with the protagonist being a black man — no matter how successful in a business sense — with (eventually) kids all over town, but there’s also a question of straight male worth in an era where lesbianism is far more acceptable than it apparently used to be. What is a dick but a tool these days?

Armstrong is a frustrated man, but ultimately this put-upon nature is all there is to him, to the point where it’s hard to identify with his plight. It’s hard to feel bad for a guy who vocally objects to his treatment every step of the way, and I honestly can’t tell if that’s the point of She Hate Me or not. He’s ordered to disrobe in front of the first group of lesbians he’s to impregnate, and it’s pointed out that roles of objectification are being reversed, but it’s not clear what the point is. All we know is that it’s happening, and it’s going to happen for like two more hours.

That’s the thing, ultimately: Lee and Genet never figure out how to tie all these disparate threads together. Instead, they opt for a “climactic” Senate hearing, some childbirth scenes, a shot of Armstrong with his, like, 20 kids and a sentimental scene at the beach — look for a reprise of that sentimental shore in Miracle at St. Anna — before rolling the credits and confusing the shit out of everybody. All the plot points are tied up, but it’s unclear what they mean to one another.

A rare misstep in Spike Lee’s oeuvre, She Hate Me is a film very much of its times, but it’s ultimate failing is that it doesn’t seem to know what it’s really trying to say about its times. It’s a weirdly vital film for all the zeitgeisty elements it wants to court — because it’s a confusing film for confusing times.