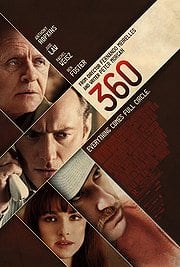 [xrr rating=1.75/5]There’s a voiceover monologue in the opening scene of 360 that ruminates on the endless number of choices disbursed across human existence. There are “forks in the road” and each path taken is another abandoned, a course of life that will never be realized. It’s the method director Fernando Meirelles and screenwriter Peter Morgan employ to alert the view that this is going to be one of those movies, the sort in which a hefty pile-up of characters will be dragged through incidents and conflicts of high drama, every turn bringing a new moral dilemma or devastating moment. The different strands will likely connect, although in distant, oblique ways often reliant on achingly inane coincidence. It’s a dismaying development for anyone (like me) who thought we might have gotten past this sort of overpraised, trumped up profundity when director Alejandro González Iñárritu and screenwriter Guillermo Arriaga broke up after the plodding 2006 film Babel.

Detailing the various characters and storylines in 360 would take up more words than the film merits and even taking a stab at noting some of the intersections would take as long as the movie’s nearly two hour running time. For a time, it almost seems as though the film is going to be a more dour, plot-laden, Euro-centric version of Richard Linklater’s Slacker, moving from one character to another, sometimes with only the most glancing connection between the two, marching along through an abundance of small stories. Instead, that’s all groundwork, and it soon becomes clear that the film is going to labor mightily to pull its disparate pieces together, developing a massive ecosystem of gloom that spans the globe.

360 has at least one thing going for it that many of its kindred films don’t: a restless urge to find something authentic that occasionally yields a nice, moving moment. For every hopelessly contrived situation–the recovering sex offender (Ben Foster) traveling alone between prison and a rehabilitative halfway house who encounters the lovely young woman (Maria Flor) who was recently cheated on and therefore wants to drunkenly, uncharacteristically indulge in a one-night stand, unduly tempting him—there’s another that carries a tinge of understated honesty. Smacked right up against that story, for instance, is the tender journey taken by a guilty, grief-ridden father (Anthony Hopkins) who’s spent years trying to find his missing daughter. There’s still some shakiness to the writing, but Hopkins finds the precisely right emotions to play to convey how anguish can be buffed down to weariness over a series of fruitless years. There’s probably no better gig for Hopkins, a great actor who generally sleepwalks through performances now, than a small role in an overly complicated film. It ensures that there’ll be enough meat there for him to do something with it, but he’s not required to stick around long enough to get bored.

As the film chugs to its conclusion, a character is burdened with a spot-on line: “That’s it, we’ve come full circle.” 360 is often as immediately tiresome as that ludicrously overt statement of the film’s very thesis. The speckling of good moments or intriguing glimpses of story can’t overcome the surfeit of drearily dull material. Meirelles’ film may purport to be going in circles, but it’s often so inert that it’s hard to believe it’s spinning at all.