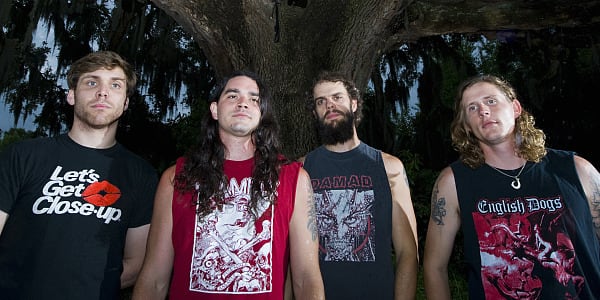 After touring pretty much non-stop since their founding in 2003, the indefatigable Baroness finally took a year off to write and record their new album, Yellow & Green, an ambitious double-LP set that shows the band at the peak of its powers, experimenting with modern-day electronica and moving way beyond the bounds of progressive metal and into the realm of genuinely classic rock. Back on the road again, lead guitarist Pete Adams kindly responded to my (admittedly fanboy-ish) questions.

A lot of great metal bands have been coming out of Georgia over the past several years—is there something in the water down there?

Yeah, there must be, ‘cause you’re right, there are a lot of awesome bands out there for sure.

Unlike most popular music these days, metal is a genre that still values musicianship and complex compositional structures. Did any of you receive any formal training or has your approach to music-making been more of an intuitive thing? Do you have a practice regimen?

I personally have never had any lessons or training. Just been playing guitar since I was 10 years old. I do it by ear and feel, mostly. I love it so I’ve always played all day every day.

Can you describe Baroness’s creative process? Are songs fully developed before bringing them to the band? Or are they conceived and worked out together in the rehearsal room? Does the recording studio play a role in the construction of a song?

We all are writers in the band. Some songs come to the table close to completion, but most songs are formed when we are together as a band. When we get to the studio the songs are at about 90+ percent. We like to leave room for that “lightning” that happens in the studio.

Despite its reputation for noise and distortion, a lot of metal albums also tend to have (or at least aspire to) excellent sound quality and your records have benefited from increasingly polished and sophisticated production values. How important is sound quality and what has been the role of producer John Congleton in achieving your sonic goals?

John Congleton’s great, he really knows how to just capture us as we do it. He most definitely helped steer us when we got caught up in a song. We really worked together to just figure out what the songs/record needed.

Which is your preferred format: analog or digital? Why?

I honestly can’t answer either/or. I’ve recorded both ways and they both have their place.

Do you enjoy making records? Or do you prefer performing live?

Recording can stress me out a lot. Playing live is why I do this, I love it no matter what.

There’s been a clear progression over the course of your career from the extreme brutality of the early EPs to the new double-LP, which transcends the metal label altogether. While the metal scene seems to foster an astonishing amount of creativity and experimentation, there is a certain segment of the audience that demands unrelenting heaviness at all costs. What has inspired you to risk breaking the bounds of “heavy metal” in order to continue to evolving as a band? Are you finding new, more open-minded fans are outnumbering the metal purists who might have turned away?

We don’t want to repeat ourselves. As a musician it’s important to challenge yourself, I believe. For us the challenge is how can we continue to grow and evolve as a band and keep it interesting and fun. None of us want to just write the same-sounding record over and over. Our fans that have been there since the beginning and are still there seem to appreciate the evolution. Others that may not know us well or haven’t seen us live may not be into it as much. I hope we continue to find more open-minded fans along the way that want to hang in there for the long haul.

Lyrically, your songs have developed as well, eschewing the clichés of the genre and moving in a more gothic, literary direction. Who are some of your favorite authors and how have they influenced you?

Everything from Herman Hesse to Cormac McCarthy.

John Baizley’s distinctive paintings have come to define the look of Baroness records while also gracing the covers of numerous other artists, both inside and outside the metal world. Is there a relationship between your visual art and music or are they separate activities with their own purposes and rewards?

To answer this one for John, yes. The music and art go hand-in-hand for John.

After taking a year off to make Yellow & Green, you have recently embarked on another grueling touring schedule. What strategies does the band utilize to cope with the rigors of travel while keeping the music fresh and interesting to play night after night? How have the new songs been received on the road?

So far the new songs have been received very well. We try to keep morale upon the road by having as much fun as possible. Playing live is awesome for us so we get pumped every time we go out on stage.

In all of your travels, is there a particular city or venue that has been especially memorable? Why?

There’s a Brazilian steakhouse around the corner from the Sunshine Theater in Albuquerque, New Mexico. I can be found after every show we play there, eating until comatose.