Spalding Gray may be remembered as a writer and an actor, but his true legacy will be the trio of monologues he committed to film. Gray’s first two films, Swimming to Cambodia (1987) and Monster in a Box (1992), filmed by Jonathan Demme and Nick Broomfield, evoke the experience of seeing the man live. He sits at a desk with a microphone, glass of water and notebook on-hand. We hear the audience react to Gray’s often funny, often gloomy tales of self-obsession. In these first two films, Gray never breaks the fourth wall, training his gaze on the audience. Spectators of these films are fly-on-the-wall observers, quiet witnesses watching other people watch a person.

Enter Stephen Soderbergh, restless filmmaker. Feted for his debut sex, lies, and videotape (1989), Soderbergh was already becoming bored with standard films with standard plots. After seeing Cambodia, Soderbergh cast Gray in his film King of the Hill (1993). The two would then go on to create Gray’s Anatomy (1997).

Unlike the prior two monologue movies, Soderbergh does not film Gray in front of a live audience. Instead, he addresses the camera directly, using his eyes to pull us directly into his world (more on the ocular thing later). Soderbergh does not simply train his camera on Gray and let him do his thing. Instead, he tries to emulate the panicked, anxiety-ridden interior of Gray’s world with a bevy of effects.

Soderbergh begins his film with a series of black-and-white interviews with people who have experienced eye trauma. It is an uncomfortable 10 minutes as we hear tells of horrific injuries that nearly blind our narrators. One woman even confesses to accidentally confusing Super Glue with eye drops. This montage finally gives way to Gray, seated at his desk, ready to charmingly tell us about his own eye disorder and how it led him on a journey through the screwy halls of alternative medicine.

Gray begins the tale describing the symptoms he began to notice in his left eye. He puts off a visit to his ophthalmologist until the blurriness becomes unbearable and discovers that he has a macular pucker, a condition that will eventually require surgery. Of course, as with any ocular procedure, there are risks involved. Permanent blindness occurs in about 1% and disfigurement is a faint possibility. It is obvious that Gray (or the alter-ego he presents here) is terrified and he seeks out any way possible to avoid the procedure, despite the urging of his girlfriend (co-writer Renée Shafransky) and doctor to get it over and done with. 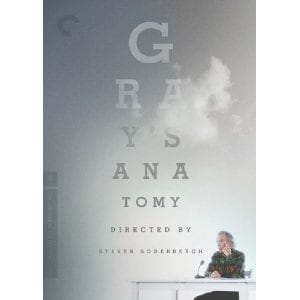 The rest of the monologue is a humorous journey as Gray stumbles from one alternative practitioner after another, anything to escape the inevitability of surgery. Along the way, he calls a Christian Science doctor, visits a nutritional ophthalmologist and learns that sea cucumber may be the culprit, takes part in an Indian sweat lodge but forgets why he’s really there and jets to the Philippines where he goes under the knife of a psychic surgeon. None of it works. And ultimately, it is the appearance of Richard Nixon at his surgeon’s office that finally gives him strength to undergo the procedure.

Gray is a captivating raconteur and while the film is short (79 minutes), it is impossible to become bored or restless. Soderbergh embellishes the story through basic filmic tricks, using smoke and lighting effects to create mood. At times, he includes rear projections to give the film a dizzying sense of place, becoming more outlandish as Gray’s travels take him to more desperate places and measures. However, Soderbergh’s tricks do nothing to outshine Gray or his story. Think of them as tasteful accoutrements which add to both the terror and hilarity of the situation.

Gray’s Anatomy would be the last monologue (spelled monolog by the author) would commit to film. After a debilitating car accident in Ireland in 2001, Gray once again had to seek the help of doctors. He not only suffered broken bones, but a brain injury that required the implantation of a titanium plate in his skull. Gray sought out doctors to help him recover, including the famous neurologist Oliver Sacks. Gray had always struggled with depression and the injuries pushed him over the edge. He began to talk about suicide. Finally, in January 2004, Gray went to see Tim Burton’s Big Fish, cried at the final line, “A man tells a story over and over so many times he becomes the story. In that way, he is immortal,” and then vanished. His body was found two months later in the East River, his death ruled a suicide.

Film is a powerful medium in the very least that it can capture the essence of a human being long after he has departed this world. Soderbergh would go on to direct And Everything is Going Fine (2010), a documentary about the life of his departed friend, a final monologue of sorts. Did Spalding Gray approach his final hours with the wicked gallows humor he shows us in Gray’s Anatomy? Or had he frustrated the endless stream of doctors and alternative medicine, realizing instead it’s nothing more than the snake oil of our modern epoch?

There is no nuance, none of the incisive commentary that made “The Daily Show” so integral…