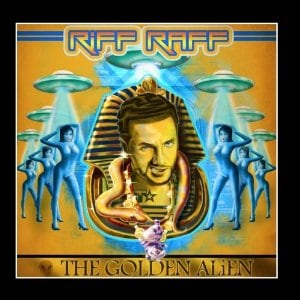 [xrr rating=2.25/5]When I received my promo copy of the always entertaining Riff Raff’s new album The Golden Alien, the file for the first single “Orions Belt” was corrupted and wouldn’t play all the way. Sometimes with promos this happens, so I went to iTunes to download the song, only to pay my 99 cents for another corrupted file that stopped playing halfway through. Turns out, the official commercially available release of this download-only albums doesn’t even come with a playable copy of its most buzzed-about song. So is the haphazardness of The Golden Alien.

Riff Raff has quickly become one of hip-hop’s most polarizing figures. While his persona is openly a character (in the most literal sense), I’m in the camp where the question of “authenticity” in hip-hop should come second to the actual quality of the music. In a post-Rick Ross world, the hip-hop audience is proven primarily concerned with what happens between pressing play and the end of the track. I believe this is for the better, but more importantly, Riff Raff’s talent is much more than just an outfit and a motivation.

As one of the most charismatic individuals in the genre today, Riff Raff (aka MTV Riff Raff SODMG) can’t help but be interesting. An unmistakable presence in any number of YouTube clips, his swag is comparable to a bug zapper in the sense where regardless one’s feelings on the man, he draws listeners in with something more genuinely organic than any buzz could manufacture. While his flamboyance is just as strong on record without the visuals, it’s unfortunate he doesn’t treat his albums with the same quality control.

If you thought Riff Raff’s album formula would change now that he’s signed a multi-album deal with Diplo, you’re forgetting that level of logic has no place in Raff’s universe. The Golden Alien is 39 minutes of unfinished rough tracks, slapped together and released as an “album.” This isn’t some lo-fi aesthetic, rather a sloppy hodgepodge whose best moments become frustrating when considering how great this album could have been. Some tracks have long instrumental breaks where missing guest verses should be, other have uncredited guest verses, others still unceremoniously end after only two verses. Yet, Raff’s among rap’s best hook writers, so to hear incredible earworms like “Break Away” and “Rice Out” marred by instrumental stretches of missing cameos becomes more disappointing with each listen.

This is par for the course with Riff Raff’s discography, and with his perpetual output (he’s already put out another album since) he’s drawn comparisons to Lil B. However, while Lil B does put out a lot of material, it’s recorded in such a small window that B finds a way to tie them under an overarching theme. B also releases this material as free mixtapes. Riff Raff expects money for these projects, which makes their shortcomings less forgivable.

By now, those familiar with Riff Raff might not be surprised with The Golden Alien’s slapdash existence. Riff Raff is an enjoyable character, and when he’s rapping or doing a hook on The Golden Alien, the results are great. Even what exists of “Orions Belt” on here is an infectious beat that plays to Raff and featured artist Kitty Pryde’s talents perfectly. However, paying 10 bucks for what’s a performance art practical joke at best and shoddy cash-in at worst is just not justifiable. While The Golden Alien maintains that Riff Raff’s a talent worth checking for, it’s by no means an essential purchase.