January 28, 2021
Home Music Various Artists: We Walk the Line: A Celebration of the Music of Johnny Cash 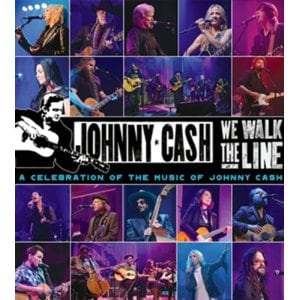 [xrr rating=4.0/5]Calling Johnny Cash a “country singer” is as limiting as labeling Miles Davis a “jazz trumpeter” or the Rolling Stones a “rock ‘n’ roll band.” Cash’s music, uncompromisingly accessible yet subtly sophisticated, has an almost universal appeal. His legions of fans extend far beyond those who typically gravitate towards country music. His life, imbued with darkness and light, tragedy and triumph, earthly struggles and spiritual longings, has inspired and fascinated people from all walks of life.

Given the unparalleled widespread appeal of Cash’s art, it seems apropos that a tribute concert dedicated to the Man in Black would feature a wide range of musicians. We Walk the Line: A Celebration of the Music of Johnny Cash mostly succeeds in showing how deep and wide Cash’s influence really goes. The April 2012 concert, recorded in Austin, Texas, is being released in a CD/DVD set as well as in the Blu-ray format. The CD features the same songs and artists as the DVD, just in a different order. The singers paying tribute to Cash are backed up by a killer house band, including Buddy Miller (guitar), Greg Leisz (steel guitar, mandolin), Ian McLagan (keyboards), Kenny Aronoff (drums) and Don Was (bass).

It’s always a treat to see Kris Kristofferson perform, and we get a triple dose of the legendary singer-songwriter in this set. Kristofferson not only sings a heartfelt solo rendition of “Big River” but also joins Nashville guitar slinger Jamey Johnson for “Sunday Morning Coming Down,” a tune penned by Kristofferson himself and memorably covered by Cash in 1970. Kristofferson joins Willie Nelson, Shooter Jennings (sitting in for Waylon) and Johnson (sitting in for Cash) to sing “Highwayman,” the haunting tune that stands as one of the singular songs of the “outlaw country” movement.

Other standouts from the concert include an emotionally naked cover of “Hurt,” the Nine Inch Nails song that kept Cash relevant even at the end of his life, by Lucinda Williams and a folky version of “The Long Black Veil” by Sam Beam, aka Iron & Wine. By far the best moment on the DVD/CD, though, is a rousing, stage-shaking performance of “Jackson” by the Carolina Chocolate Drops. The Durham-based string band injects the gentle, good-humored June Carter-Johnny duet with some serious punk-rock attitude. Their vocals are practically screamed and strings are broken by the end of the tune. This version of “Jackson” is the one tune in the set that rivals the original recording for artistic interest and integrity.

Obviously, a tribute set such as We Walk the Line is never going to please everyone. It’s a little surprising to see covers of tunes such as “I’m So Lonesome I Could Cry” and “Help Me Make It through the Night” included. Although Cash recorded memorable covers of these songs, they are associated more with other artists (Hank Williams and Kristofferson, respectively). Given that the producers had such a vast array of artists they could have recruited to participate in this tribute, it seems a little odd that screen time is given to Amy Lee of Evanescence and Pat Monahan of Train. Their musical connection to Cash’s music seems tenuous at best. On the bright side, their appearance next to such legends as Kristofferson and Nelson does reinforce the Man in Black’s universality, perhaps the reason these pop musicians were included.

If We Walk the Line encourages listeners to rediscover the music and life of Johnny Cash, then it is successful indeed. This tribute paints a vivid picture of an artist who will never be forgotten. If there is indeed anyone out there who has never experienced the everyman pathos, the spiritual ecstasy, the sublime artistry of the Man in Black, there’s never a better time than now to jump on board this train.