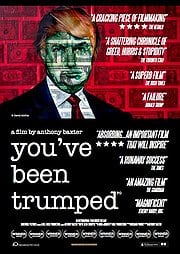 [xrr rating=2.0/5]The inherent and problematic premise in You’ve Been Trumped– a documentary about Scottish villagers fighting against Donald Trump’s takeover of a part of their town in Aberdeenshire— is that the Grand Narrative formula is not woefully outdated if positions of power are simply reversed. Take the history books, cross out names, romanticize the underdog’s story and make the privileged white guy the loser, the villain. In this case, that guy is Trump, who plays the part so well director Anthony Baxter seems oblivious to the fact that a billionaire property magnate might even invite controversy if it gets him more press. The underdogs are Balmedie villagers whose generations-old homes are almost forced into government buy-out so as to not interfere with Trump’s plans to build two 18-hole golf courses and an accompanying resort.

It’s easy to sympathize with the villagers, whose efforts to keep their homes result in bullying by local police, politicians and hired security guards. Their electricity and water are cut off as soon as construction commences. Attempts to communicate with Trump’s construction crew to fix the problems become futile. Trump’s crew even go so far as to dump piles of dirt around their houses to hide them from the view from the golf course, naturally cutting off their own view as well.

Baxter’s emotional involvement becomes clear once we are shown footage of him being cuffed and taken away in a cop car. The police inexplicably show up at one of the villager’s homes during an interview; they confiscate Baxter’s equipment and footage and aggressively cuff and detain him at a police statfbaxion for a few hours. One of the officers cites a code violation that is never explained during the scene or in a later footnote. Though the scene is clearly un-staged, it is edited for heightened melodrama that never pays off due to Baxter’s lack of context following his release.

In addition to the takeover of villagers’ land, Trump’s resort is supposedly an environmental disaster for the dune system, which has been deemed by environmentalists a Site of Special Scientific Interest. It’s almost too easy for Trump to play spin doctor: he claims the golf course is “environmentally perfect” as it will stabilize the dunes. Even though the film addresses some of the environmental concerns via the use of talking heads, I didn’t walk away from it actually understanding the environmental impact of losing one of the world’s remaining dune systems.

It’s no surprise that the film leaves gaps unfilled given the polemic route chosen by Baxter. The majority of the film focuses on the emotional journey of the villagers and, unfortunately, Baxter himself, instead of the multifaceted nature of what is surely a very complicated turf war. This is not only a war between Trump and the locals, but between different levels of government. The local government initially refused Trump’s plan, but the decision was overturned by the national government which approved it in a Parliamentary hearing. A closing intertitle claims that Trump never returned any calls to do an interview during the film’s 12-month production period. How presumptuous for a filmmaker to assume a billionaire would ever agree to do an interview. How equally presumptuous that Trump must be so powerful that he is the sole person Baxter could interview to play devil’s advocate. If we are to understand the reasons why Trump has been allowed to take over an environmentally precious habitat and ruin the homes of Scottish villagers, it doesn’t take a genius to realize that there are more players than the emperor at the very top and the afflicted people at the bottom. The greater institutional forces at play are never explained nor at the very least explored. It makes the arguments and logic flowing behind You’ve Been Trumped as uneven and slippery as the wind-blown sand in the dunes.