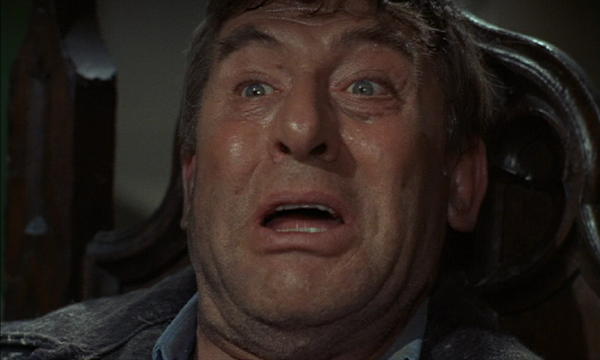 Set in the shadow of the Second World War, Quatermass and the Pit (1967) is a subtly cerebral effort from the legendary Hammer Film Production studio. This understated science fiction yarn with hints of horror was not exactly what audiences expected from a Hammer film, which usually provided something more in their films: more violence, more satire, brighter colors and louder booms. The subdued, warm palette of deliberately soft grays, greens and browns of Quatermass and the Pit were a world away from the usual Hammer horror aesthetic. The first two Quatermass adaptations were black and white, and any in the audience hoping for a typical Hammer color-fest for Quatermass and the Pit, as well as some stellar special effects, were surely disappointed with what they saw.

Professor Bernard Quatermass is a scientist in the U.K. space program. He is moral, ethical, and usually the sole voice of reason amongst competing agendas. Quatermass is often found alternately working with the government and military and having to fight against their anti-science agenda, and that is exactly where he finds himself as Quatermass and the Pit opens.

The professor (Andrew Keir) is informed that his space science foundation is being taken over by the military, specifically Colonel Breen (Julian Glover), who has bombs in his eyes when he looks at Quatermass’ scientific achievements. This bastardization of science is put on hold temporarily as Breen is called to investigate a strange discovery during construction at the Hobbs End underground station. Quatermass tags along to see what Breen at first suspects is a bomb, a large non-metallic object found amidst fossils of early humans. The archaeologists at the site, Dr. Roney (first-billed James Donald) and Barbara Judd (Barbara Shelley) soon realize the ancient humans were not near the object, they had been inside the unidentified vessel along with several large locust-like creatures, whom they eventually identify as Martians inside a crashed spacecraft. 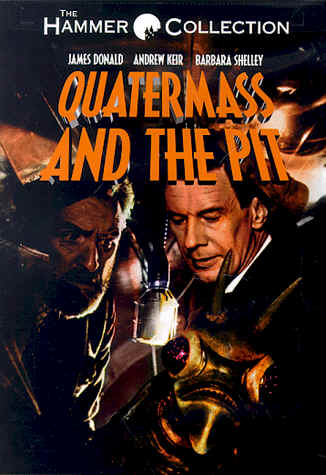 There are plenty of films whose reputations have suffered thanks to poor special effects, and make no mistake, the Martian creatures of Quatermass and the Pit are often laughable. What should have been the mummified bodies of beings from a nearby planet are instead clumsy rubber models doused in green paint. Later images of these creatures at war on Mars are embarrassing, a slew of small models stuck to sticks like foosball figures, then set amongst a few firecrackers.

If the restrained tone of the film hadn’t been enough to tarnish the reputation of this Hammer science fiction-horror flick, the hilarious special effects certainly were. It would be easy to say the film is a good one despite its effects, and though they look ridiculous today, the effects were not nearly the enormous gaffe in 1967 as one would think. The film’s SF/X supervisor Les Bowie was unquestionably misguided in mixing live insects with tiny figures on sticks, but it should be noted that the use of models was not at all unusual for the time. Master special effects artist Eiji Tsuburaya’s work in dozens of Japanese films, most notably the Gojira series, had popularized the use of scale models.

Further, the obviously fake creatures are explained somewhat cleverly by the theory that they were always fakes, leftover propaganda planted in London’s Underground by the Axis powers during World War II; this very interestingly mirrors a relatively common real-world belief by some that dinosaur fossils were planted by Satan — or, in some theories, by God himself — to test man’s faith. And man’s faith is indeed tested by what is found in the walls of the London Underground station at Hobbs End.

The horror elements of this science fiction film are as subdued as the color scheme. Fear is set to a low level hum at first, merely mild curiosity from the public when fossils of modern humans that date back to five million years ago are found. Fear builds, however, as the scientists discover the insect-like beings are our ancestors from Mars, horned creatures responsible for the mass extermination of entire races on their ancient Martian world. It’s very Lovecraftian, though unlike Lovecraft’s literary dismissal of religion, science becomes allied with religion. Both identify the aliens as almost-literal demons from Hell, and in their way, Dr. Roney’s electroencephalograms and Professor Quatermass’ questioning of victims act as scientific exorcisms of the devil, and with the same chilling results.

Equally frightening is the military, as represented by Col. Breen, manipulating the truth to their own ends. Breen’s Nazi propaganda theory gives way to the British military’s own propaganda, complete with telecasts and cars in the street broadcasting lies to the public. These allegedly planted aliens, along with references to a “pentagon” and vague allusions to atomic bombs, are so briefly mentioned as to be almost subliminal suggestions to the audience. The end result is that what we see in the film is not even close to the beginning of the story, that there are unexplored parallels to the terrifying scenes of slaughter from the alien past and our own human present.

What is particularly stunning about the film is how deftly it juggles multiple competing viewpoints. While Quatermass and the Pit’s philosophy decries the closed-mindedness found in the extremes of the military, religion and science, it is not unkind, still respectful of the humanity behind these views. Yet that respect does not overshadow the fact that evil is within all people regardless of their affiliation, and it is terrifyingly easy to induce.