July 11, 2020
Home Food No Manwich Tonight and Other Ways to Improve Your Life: Welsh Rarebit 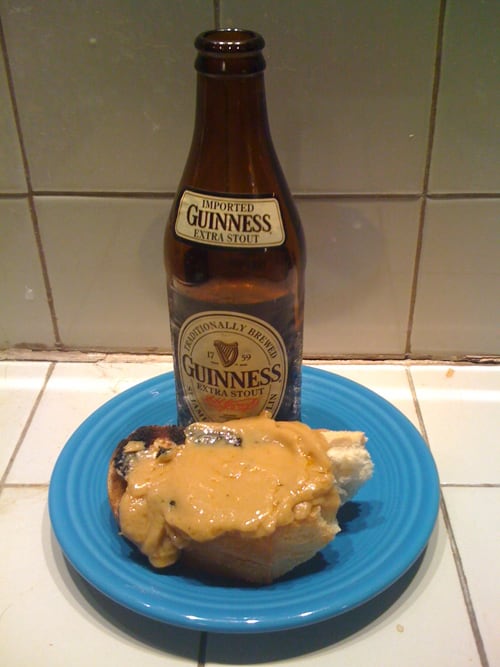 STACEY: Welsh rarebit has been a curiosity of mine as long as I can remember passing over it week by week and year by year in the frozen food section. It’s true, Stouffer’s makes a microwave version of this dish, and that is kinda weird, right? Have you ever seen it on a menu, anywhere? Exactly. Here’s the thing: I HAVE NO IDEA WHAT IT IS, other than it seemed to involve some sort of gravy over triangles of unidentified edible material. My gut feeling was that it contained rabbit meat, but I think that is based on a misremembered Looney Tunes cartoon. Like, “Bugs Bunny in… WELSH HARE-BIT!” wherein a shower-capped Bugs is in a big cauldron ladling boiling water and stew vegetables over himself as if it were a savory spa soak tub. But at the same time I knew that couldn’t be right, if only because if it were, the price point should be way more than $2.99. I wasn’t alone in this confusion: in my poll of four whole people, two of them also thought Welsh rarebit was rabbit, one said, “Steak… no, rabbit… no, steak. Okay, I looked it up, it’s rabbit,” and a final smart aleck replied, “Welsh rarebit is made of… imported rarebits.”

I can handle this, I think. Tom, hit me with it.

TOM: I have something I need to share with you, Stacey, a small factoid which will explain to you why I enjoyed cooking Welsh rarebit in a very irrational manner. I have the same waist size as Rex Ryan (the gas bag buffoon who coaches the New York Jets). Okay, catch your breath now, it’s not as bad you think. I’d argue I hold it a little better on my frame than he does but still, as soon as I found that out I lost every ounce of self-esteem that I had and subsequently started incorporating a serious amount of vegetables and subtracting everything else from my diet. Living in New York and being a consumer of our over-saturated sports media means that you get to know Rex Ryan in a way that makes you realize that once you have anything in common with him, it’s time to make changes in your life. Just listen to this blowhard after a recent press conference:

“You know what? I look at myself as the best defensive coach in football,” Ryan said after the Jets’ first training camp practice on Friday. “That’s saying something because Dick LeBeau is pretty darn good. Bill Belichick is pretty good.”

That would be like me saying, “You know what? I look at myself as the best food writer in the universe and that’s saying something because Mark Bittman ain’t half bad, and Michael Ruhlman is okay, too.”

STACEY: I’m just shocked to see a Jets rant about media overexposure that does not mention Tim Tebow! Good on you, Tom. (And sorry to have brought it up.)

TOM: So I’ve used that as the impetus to try and shed a few pounds which, Rex’s foolishness aside, was a little overdue anyway. What this has meant in practical terms is that I haven’t eaten anything that goes into making Welsh rarebit in a good while. Cheese, bread, butter, flour, beer! Can you believe how unhealthy everything is in this recipe? IT’S AWESOME!!!! You might as well mainline concentrated liquid cholesterol and snort crushed up M&Ms for dessert after you eat this, just to complete the circle of unhealthy that is Welsh rarebit. After a few weeks spent consuming a menu that should have been designed for a chipmunk rather than a human, eating this glorified English pub version of grilled cheese was like having a thousand angels pierce each taste bud on my tongue. So be forewarned, I have no objective way of knowing whether the recipe I am sending over to you is utter crap or not. Eating all this wrong after going so long without it made it seem right to me in an otherworldly way.

STACEY: Technically, you could call this a vegetarian meal, and that should count for something!

Put a medium saucepan over low heat, melt the butter and whisk in the flour. Keep stirring for 2-3 minutes taking care not to brown the flour. Whisk in the Worcestershire sauce, mustard, salt, pepper and cayenne pepper and incorporate until smooth. Do the same for the beer and then the heavy cream. Add the cheese in small increments until the mixture is smooth and the cheese is completely melted. Pour over the toasted bread and serve immediately.

STACEY: Well, shit. This didn’t turn out too well. I conquered the roux, but somewhere along the way the whole thing started to separate and it was not very sauce-like. It was swirling around the saucepan in one gelatinous patty as I whisked my little heart out. My boyfriend kept making me panic by telling me to adjust the temperature up and down, so that probably didn’t help. Also, an un-air-conditioned kitchen in Philadelphia during an everlasting heat wave is a condition under which I separate. Score one in the loss column. The good news? There are five more Guinnesses in the fridge, so I might just end up drinking my meal tonight.