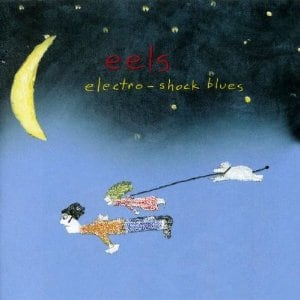 After releasing a single release under his own name and then two more under his “E” moniker, Mark Oliver Everett joined the then fledgling Dreamworks label and recorded the first Eels album, Beautiful Freak. It remains a pop-rock album tethered cruelly to the aftermath of mid-‘90s rock, post-grunge alternative stylings making it an artifact that’s easy to forget. Whether consciously or not, Everett was still trying to find a style that would be unique to the Eels — one that favored his eccentric taste for delicate, ornamental instrumentation alongside his gruff, cigar-smoking croon. E found exactly that sound on his follow-up album, Electro-Shock Blues. For fans and critics alike it’s his greatest record to date. Not coincidentally, it’s also one of the most personal.

Following his sister’s suicide and his mother’s battle with terminal lung cancer, as well as the death of his father many years before, Everett became the only living member of his family and recorded an album that cataloged those losses and meditates on the reasons to keep on living. Everett counts those days recording Electro-Shock Blues among his happiest, a positive counter-balance to the weight of all that pain. Electro-Shock Blues is an optimistic album despite itself, the front half taking on his sister’s early passing, uncomfortable funerals and spectral visitations, shaky familial relationships in the midst of ongoing pain and shitty hospital food. Afterwards, Everett finds reasons to accept and even appreciate death, those losses making the future that little bit more worthy of appreciation.

Critics would fairly criticize later Eels releases for a consistent moroseness and Everett’s woe-is-me moping, but Electro-Shock Blues managed to draw from deep wells of emotional anguish in a way that is complete and justified — absent of overt self-pity but also checked by ultimately hopeful sentiments. At its core Electro-Shock Blues is more about Everett’s family than it is about him coping with their absence. The album sleeve includes drawings by his father (the “Baby Genius”) and poetry written by Everett’s grandmother, the lyrics to “Elizabeth on the Bathroom Floor” are based on his sister’s poetry and most of the album’s front half describes his sister’s and mother’s decline in expressive detail. The portraits these songs create are neither overly flattering nor the work of a disgruntled brother and son. And it takes the whole album to give each adequate attention.

Well over a decade after Electro-Shock Blues was originally recorded, it’s apparent that sophomore album would define the themes, styles and general aesthetic of Everett’s entire recorded output as E, and even some of his records assigned to other monikers. Leaving the grungier elements of Beautiful Freak along with the decade that made them necessary on a rock record of just about any sort, Electro-Shock Blues instead incorporates a curious mix of instrumentation that distinguishes it as an Eels record without Everett even including lyrics. Borrowing a few experiments from his twee early solo records, Everett builds tiny little symphonies of toy piano and skipping-record pop melodies that make the dark ambience on songs like “Going to Your Funeral, Part II” and “The Medication Is Wearing Off” strangely childlike. His acoustic guitar always sounds thin and brittle as on “Dead of Winter” and washes of strings compete with groaning soul-lounge cacophony (as on the memorable “Cancer for the Cure”). Playful funk freakouts recall Beck’s Midnite Vultures years and would show up again and again in future Eels singles, and their contagious energy masks some of the lyrical darkness in songs like “Cancer for the Cure” or “Hospital Food.” Everett’s best songs cover all of these descriptors at once, and on Electro-Shock Blues, single “Last Stop: This Town” and the wrenching “Climbing to the Moon” (arguably Everett’s single greatest recording) manage to do so while sticking to the album’s conceptual consideration of mortality with aplomb.

Electro-Shock Blues not only eulogizes Everett’s family honestly by inhabiting those characters without sentiment and documenting his catharsis with great reserve, it’s also the album that distilled Everett’s style into its purest form. His discography can’t and shouldn’t be understood without it.