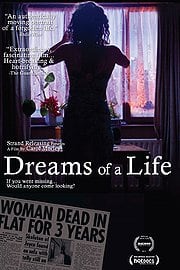 [xrr rating=4.0/5]No one noticed when Joyce Carol Vincent disappeared. Not her family, even though they had presumably tried to contact her when her father died. Not the government, who didn’t notice she hadn’t paid her rent or electricity bill for years, and not anyone destined to receive the Christmas presents she was wrapping when she died alone in her London flat in December, 2003.

It seems impossible for someone to vanish without a single person noticing, though that appears to be exactly what happened to Joyce. When her body was discovered nearly three years after she had died from indeterminate causes — her body was so far gone that no definitive cause of death could be reached — director Carol Morley was shocked that newspapers said almost nothing about Joyce herself. She discovered they wouldn’t or, very often, couldn’t unearth anything about Joyce, and that her family refused to even be identified. Morley spent years tracking down Joyce’s friends and co-workers for the interviews that came to comprise her documentary Dreams of a Life.

We are all complicated creatures, of course, people who construct multiple personas with ease. The self we show our boss is not the self we show our bar buddies, for instance, and Joyce was no exception. This is very plainly illustrated in Dreams of a Life, primarily by the conflicting views of those who knew her, some describing a beautiful, fun-loving singer, always the center of attention and on her way to bigger things. Others insisted Joyce was not a good singer at all and was prone to putting on airs. Most notable are two of Joyce’s former boyfriends, interviewed extensively for the film; one is heartbreaking and honest, the other far more critical.

It’s possible that all the things said of Joyce are true, even if they seem contradictory, although it was obviously easy for some to judge Joyce for her very human inconsistencies. That judgment leads to the theory that Joyce could have avoided her fate had she gotten married, a notion that is a rather creepy undercurrent to the documentary. Multiple people note it was odd for her to be “so old” yet not have kids — she was 38 when she died — and being unmarried and childless must speak to a much bigger problem with her.

And that problem is absolutely framed as being with her, not society, at least by some of those interviewed. Coupling their opinions of Joyce’s lifestyle with the fact that she was not married, it becomes clear that many decided, perhaps unconsciously, that Joyce chose to fall through the cracks by not living up to society’s expectations of what a woman of a certain age should be. It’s all suggestive of an unspoken minimum requirement a woman must meet before earning society’s consideration.

Though Joyce’s friends rarely question how much we as a society have to answer for, at least in regards to those who disappear through lack of caring, Morley makes it a central point in Dreams of a Life. British officials were unsurprisingly dismissive in requests for information about how a woman who had been in both a hospital and battered woman’s shelter was not followed up on, or how her electricity remained on despite being unpaid for three years. One government response went so far as to say that it was not in the public’s interest to know about these things because it wouldn’t do the public at large any good.

But that is exactly the kind of thing the public should know. We presume that even if we check out of society willingly, a safety net of sorts exists via bill collectors, repossessors, government, taxes and, in Joyce’s case, social workers. Even if there are no longer co-workers, family or friends in our lives, we cynically believe those who want our money will eventually be around, though clearly that is not true. Joyce was certainly not the first to fall victim to being forgotten; the cases of Yvette Vickers, David Carter, Robert Roll and plenty of others have made the news over the last year or so, yet we still believe no one can never be truly overlooked. Perhaps it would do the public some good to see those electricity account records of Joyce’s, to get the full impact of how easy it is to be forgotten.

Unfortunately, some of the overall impact of Dreams of a Life is diminished when it deliberately blurs the line between fiction and fact. There is footage of what appears to be the clean-up crew assigned to Joyce’s bedsit after her body was found, and though this cannot be actual footage, it is presented as such. Some unintentional obfuscation comes in brief glimpses of what one assumes are the director’s notes during production, with vague pronouns and incomplete sentences clouding the issue rather than illuminating it.

The documentary is also heavy on footage of actress Zawe Ashton as Joyce Vincent, in some scenes reenacting what has been described, in others moping around her bedsit in fictional scenes, emotionally moribund, reliving past glories and watching others’ lives out her front window. It’s certainly affecting and Ashton is terrific in her part, as is Alix Luka-Cain who plays Joyce as a little girl. But it is also highly presumptuous, casting Joyce as someone who she may not have been in a rather base attempt for sympathy.

Being alone doesn’t always mean being lonely; that may be an old sentiment but it is an apt one, and it says something about audiences that director Morley judged — probably accurately — that the idea of Joyce Vincent consciously distancing herself was much less sympathetic than portraying her as desperately lonely and missing her past. But it calls into question just how much of Joyce we are really remembering here. The real woman is likely still forgotten, replaced with a fictional image of a Joyce Carol Vincent that is cinematically palatable to an audience expecting more entertainment than enlightenment.