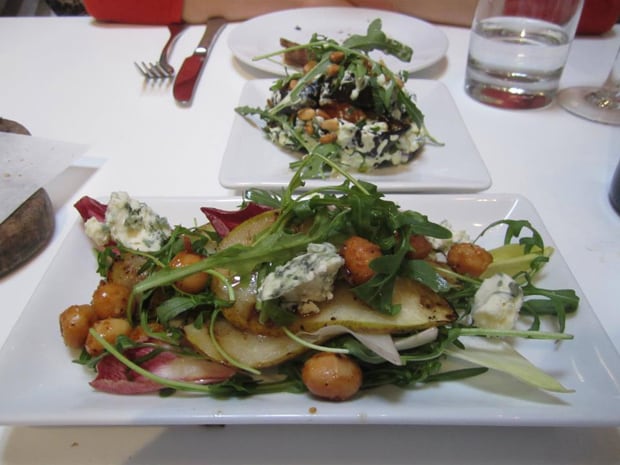 Yotam Ottolenghi first popped into my consciousness when my vegetarian, at-the-time girlfriend found his cookbook, Plenty, and insisted I use it to cook for her. One of the most visually enticing cookbooks recently published, Plenty is as innovative with its flavor combinations as with its techniques. Ottolenghi’s recipes are heavily influenced by his upbringing in Jerusalem, yet it’s obvious that his parents’ German and Italian nationalities have helped put a distinct spin on his Middle Eastern-based dishes.

Based on how well my forays into Plenty turned out, Ottolenghi’s quickly jumped to the top of our must-go-to list whilst we were in London during our April European excursion. Looking into reservations, I learned some facts that I would’ve known had I bothered with reading the introduction to Plenty.

First, despite producing an exquisite vegetarian cookbook, Ottolenghi’s is not a vegetarian restaurant, nor is Ottolenghi a vegetarian. In fact, he seems to be a meat lover in that special way only classically trained chefs can attain. Second, there are four Ottolenghi’s outposts spread throughout London. The only one to actually have a traditional restaurant is the one in Islington. All the others are simply take-away deli type places, albeit haute-couture take-aways. The Islington installation does this also, but the main draw is the sit down restaurant.

Reservations procured, we took the Victoria line to the Highbury & Islington stop for an early dinner. After pausing to laugh at a pub called “The Famous Cock,” we ignored all the signs pointing us presumed Arsenal supporters towards the Emirates Stadium and walked south along Upper Street until we recognized the whitewashed facade adorned with thin red letters spelling out “OTTOLENGHI.”

Unlike most traditional restaurants, Ottolenghi’s immediately puts food in the front of your mind. A product of the space also being a take-away joint, we were flanked by purchasable edibles as soon as we entered. On our left, two display tables stacked three or four layers high with sweet and savory desserts. On our right, canned goods, vinegars, bread, produce, wine and pre-made salads.

After recovering from the overwhelming amount of choices already offered, I took a look at the rest of the restaurant. A white ceiling and white sparsely decorated walls meet with a worn and unfinished looking hardwood floor. Neatly built into the walls are storage spots for wines and produce. This is where the restaurant supposedly begins, letting the deli slowly fade away. However, the lines between the two are blurred, as it was never clear if the storage areas in the walls and the bread station were for deli customers or for the wait staff to use. The dining area is dominated by two long communal white tables. There are a handful of two person tables to the right of the communals. On the left side is a small rectangular window into the kitchen that provides a tantalizing glimpse of things to come.

We were seated in the middle of the communal table in the back of the restaurant. Something about the dining experience put me off the whole time and I think it was merely the style of the tables and chairs. The tables had one solid leg running horizontally the whole length of the table. Given the cramped nature of the seating, I was continuously bashing my feet up and against various objects. The chairs, while aesthetically pleasing as their soft, subtle curves were obviously chosen to offset the rigid right angles of the tables, were awkward and uncomfortable. But, this is all pedantic. Let us get to the part that really matters.

The eggplant and yogurt was the least exciting dish of the group. The thick yogurt accented with the earthiness of garlic and the tang of sorrel combined well with the eggplant into a nice creamy mess. The pear and bleu cheese was an eye-opening experience that has led me to pair those two in my own dishes. The sweetness of the pear contrasted with the saltiness of the bleu cheese is a perfect example of those two opposite tastes working harmoniously in tandem. Spicy macadamia nuts added a satisfying crunch to the dish.

The filo parcels were at times literally bursting with the haloumi and oregano, yet the filling was a bit understated. As too often with similar preparations, the filo gets in the way, overpowering the tastes inside. The real reason to order this dish is the relish; the pistachio and pomegranate seeds coated in tahini and topped with a bit of mint was perhaps the best thing presented to us.

When we chose our dishes, I was looking forward to the scallops; I thought the flavor combination sounded really interesting and I was in for some sort of revelation. The scallops were seared perfectly, as expected. However, the rest of the dish didn’t quite click. The curried pumpkin seeds were delicious, as were the cauliflower fritters. Still, I’m not sure why all of these things were on the same plate. It was like when you go to a buffet and just pile food up with no thought of fluidity. Sure, everything tastes good standing alone, yet there’s some level of dissatisfaction.

My favorite dish, in a shocking development to absolutely no one, was the lamb cutlets. A crispy exterior with a touch of char-grilled flavor and a tender, juicy inside; perfectly cooked lamb. The jalapeno sauce added a surprisingly delightful dimension to the lamb. The sauce was perfect; moderately spicy with a subtly smoky jalapeno tang. The miso-tinged eggplant provided a brief respite if I overindulged on the jalapeno sauce.

For dessert, our server invited us to get up and go to the front of the store to take a look at what was available. Our eyes immediately honed in on the two chocolate cakes. One was topped with chocolate mousse and the other was a simple looking cake. Served with our desserts was a cup of custard, which we decadently applied liberally to both desserts. Thinking we had satisfied our chosen sin of the evening, it was quite the shock to learn that both cakes were filled with cream. Needless to say, in spite of the early dinner we were done looking at food the rest of the night.

The best and most expensive meal of our trip, Ottolenghi’s actually surpassed my heightened expectations. The food was remarkable and the tastes were as inventive as his cookbook suggested they would be. The atmosphere of the restaurant retained the light, congenial feel of a neighborhood take-away establishment. Every employee maintained a joviality that could only be the product of loving what they do and where they work. Ottolenghi’s has joined St. John on my short list of places I must dine at whenever I return to my beloved London.

I’d been to Los Angeles once, about five years ago. Before I really gave a shit about food…