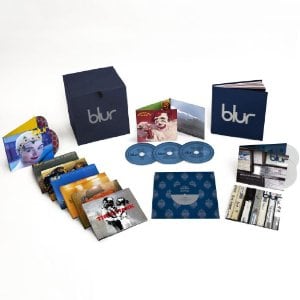 [xrr rating=4.25/5]It’s not surprising that Great Britain, wanting to show off the breadth and depth of British popular music, would put Blur proudly on stage for the entire world to see, featuring them prominently in the 2012 London Olympics. The band headlined a huge post-Olympics concert at London’s Hyde Park. The song “Parklife” was covered by a large ensemble, backed by the Massed Bands of the Guards Division, in the official closing ceremony.

A strong versatility comes through on Blur 21, the 21-disc set released to commemorate—go figure—the group’s 21st anniversary. Each of the seven original studio records are re-released, complete with a second bonus disc of alternative takes, demos and B-sides for each album. Three live DVDs and four additional discs of rarities round out this undeniably overwhelming package. The question arises of exactly what type of consumer will fork out the $150 or so necessary to own a collection as gargantuan as this. Only the most diehard Blur fans are likely to purchase the entire set. The good news is that while the four rarities CDs and live DVDs are only available as part of the complete package, each of the seven studio records can be bought as a two-disc stand-alone reissue. The albums are available in both CD and vinyl versions. It’s possible, then, to stock up on an exquisitely packaged, definitive version of your favorite Blur record(s) without breaking the bank on the whole lot.

Leisure, Blur’s 1991 debut effort, is not likely to be a favorite to many. It finds the band, originally formed in 1988 as Seymour, striving to figure out what image and artistic concept to project to the public. Damon Albarn and Graham Coxon, Blur’s two masterminds, alternate between shoegaze-y and baggy Madchester soundscapes but fall short in the songwriting department. Even lead singles “There’s No Other Way” and “She’s So High” sound dated and incomplete today.

The band went into debt during and after the production of Leisure and had to tour the U.S. to recoup their losses. The band members, Albarn foremost among them, got frustrated at the indifference of American audiences to their music. It seemed they were more interested in what was happening in Seattle at the time than what was happening in England. Amidst a sea of depression and alcoholism in the aftermath of the U.S. tour, Modern Life Is Rubbish (1993) was an attempt to make a definitively “British” record. Indeed, the influence of Ray Davies, as well as other traditional British pop groups, is on full display here. This sophomore album is a poignant collection of suburban character studies. Tunes like “For Tomorrow” and “Chemical World” have a cultural acuity and literary acumen that no songs on Leisure can approach.

The best was yet to come, though. Parklife (1994), the group’s much-lauded third album, goes even deeper and wider than Modern Life. Seemingly every major tributary of British pop music is explored here—disco-pop, dance-hall, orchestral-pop, punk, psychedelic rock, etc. Parklife’s laser-sharp thematic focus on modern British life is the glue that holds the record together, quite an accomplishment given its insane stylistic diversity. The Great Escape (1995) continued some of Parklife’s obsession with social commentary and attention to character detail, albeit in a darker manner. As Albarn’s lyrics became more complex and twisted, so did Coxon’s adventurous guitar playing.

It’s easy to see why American indie audiences fell for Blur in droves around the time of their 1997 self-titled album. Coxon’s taste in underground/alternative music came to the fore on this effort. The sonic experiments of The Great Escape were amplified here, giving us the noisy soundscapes of “Essex Dogs,” the dirty garage-pop of “Song 2” and the trippy folk of “Country Sad Ballad Man.” On 13 (1999), Blur continued its experimentation, proving that the avant-garde can be successfully injected with legitimate pathos. “1992” is the best illustration of this truth, as a beautifully circuitous, Radiohead-esque melody is built on top of washes of white noise and spaced-out guitar sounds. Albarn’s breakup with Elastica singer Justine Frischmann informs the gospel-tinged “Tender,” and the band’s struggle with addiction comes out on fan favorite “Coffee & TV,” a tightly constructed, infinitely catchy pop song if ever there was one.

Think Tank (2003) seems kind of like an afterthought. It’s Albarn’s record, since Coxon was pretty much absent. While most Gorillaz songs are more interesting than anything presented on this seventh studio Blur album, it’s a necessary bookend in the 21 collection. Leisure showed us a band struggling to become themselves, and Think Tank shows us a group whose indulgent tendencies finally got the best of them. In between, there’s a whole lot of dynamic, remarkably diverse music waiting to be explored.